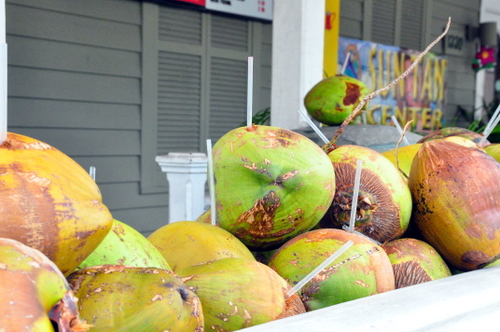 I'm all about eating locally grown produce, and on hot days these coconuts really hit the spot.

SIDE STORY: While on a Southern Caribbean cruise several years ago, my mom and I bought a whole coconut from a street vendor in St. Lucia.  We brought it back aboard the cruise ship with eager anticipation, but quickly realized that we did not have the necessary culinary tools to open it.

I tried to use my bulging biceps - no success.  I also tried to toss it in the air and hit it with a spinning back kick.  No success again. 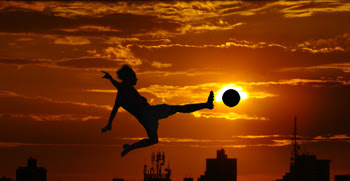 We ended up bringing the coconut down to the dining room and asking if someone in the kitchen could open it for us.  The staff happily obliged and moments later brought the coconut back, artfully opened, the coconut water inside glinting alluringly in the late afternoon sun.

ONE of us (I won't say who), then proceeded to elegantly trip and knock the coconut off the table onto the ground.  It started rolling away underneath the tables of unassuming onlookers, the contents spilling every which way.

It was horrifying.  Tears were shed.  Mass hysteria ensued.

Morale of the story: Always be prepared to handle runaway coconuts with care.  Have the appropriate resources on hand when coconuts are involved.  Consider keeping some of this in your back pocket: 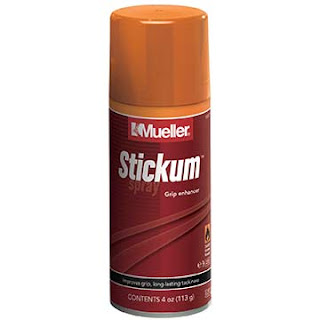 On the topic of coconuts, I've heard a lot recently about the benefits of drinking coconut water, especially after long or hard workouts.  It is supposed to provide excellent hydration, along with supplying ample potassium and various other nutrients.

Bottled coconut water is on the expensive side - around $5 or more for a liter.  I've never tried it for this reason.  But, I saw it on sale at the grocery store last night so I thought I'd give it a whirl.  The verdict so far after one glass with dinner?  I am a huge fan!  It is very light and refreshing and it's not too sweet.  I think it tastes a lot better than sports drink.

I'll have to give the coconut water a whirl after a long run to see how it works then, too.  It's too expensive to drink all the time, but maybe it can be an occasional treat after really hard workouts. 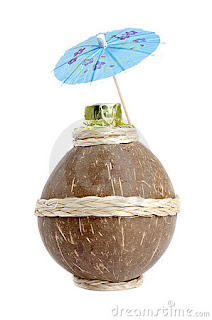 Speaking of coconuts and other things that can take a tumble... yours truly had an up close and personal meeting with the sidewalk yesterday while out running.

I'm used to running on uneven pavement.  However, that didn't prevent me from gallantly tripping over an unlevel area of the sidewalk.  I stumbled forward and tried hard to regain my footing, but no such luck.  All balance was lost and I went crashing into the sidewalk.

The brunt of the force was taken through my right elbow and forearm, but I took plenty of impact through my hands and my right leg.  I had to use a giant spatula to scrape myself off of the sidewalk.
﻿﻿﻿
﻿﻿﻿I thought for sure that I had ripped holes in my tights, gloves, or jacket on impact, but thankfully no clothing damage.  I was more embarrassed than anything else.  My spill took place about 15 feet away from a stop sign intersection, where a car was stopped.  I thought that the driver or passenger might roll down the window to ask me if I was okay.  However, the car just drove off without missing a beat.  Guess they already knew how tough I am!

To validate this point, I got back up and dusted myself off, then kept right on going.  I finished the rest of my run without further issue.  Unfortunately, I did sustain some major scrapes on my right elbow, which still hurt today.  Otherwise, though, all is fine.

Morale of the story: It's always fun until somebody gets hurt.  Appropriate gear is important to prevent possible injury.  Consider doing all future training runs with gear like this: 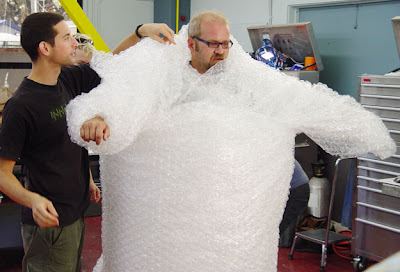