Singin' in the rain, and racing aerodynamics

The Chicagoland area underwent some heavy rainfall today.  (The rainfall has been much needed, given drought-like conditions for the past several months!) 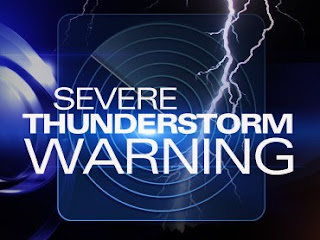 As soon as I saw the ominous grey skies and the raindrops pelting my windows, I did what anyone would do in this situation.  I laced up my running shoes and darted outside.

Running in the rain is a great way to mix up the running routine, especially in the summertime!  It's been so hot and humid outside that the rain is actually incredibly refreshing.  It's fun to slosh through puddles and to smell the wet grass.  It also makes me feel like a hard-core runner.  Especially when I see other people huddling underneath overpasses or walking around waving their umbrellas.  Comparatively, I'm tearin' it up in my running shoes and actually wishing that it would rain harder.  No drizzle for me - give me the good rain!


My one question is regarding lightning.  Is it considered unsafe to go running if it's lightning outside?  I think I've read a lot of instances in which events take place "rain or shine, except in the event of lightning."  I'm no meteorologist, but don't they say that the odds of getting hit by lightning are literally one in a million?

Maybe someone could design a lightning rod hat for runners.  I can see it now: "A guaranteed deterrent for all-weather electricity!  Run safe and run confident with your own custom-designed lightning rod hat!"

Manufacturers of running gear, you heard this new product idea from me first!!!!!


On a related note - my running shoes obviously got wet this morning while I was out in the rain, which made them significantly heavier.  When I was putting them away and rearranging my other shoes, it made me observe that certain pairs of my (dry) running shoes are also noticeably heavier than others.

I was thinking ahead to the Chicago Marathon this October and considering which shoes to wear for the big day.  Based on my current running shoe rotation, I was debating between the Brooks Glycerin 8s or a pair of Mizuno Wave Rider 15s.  The Brooks (after adding my prescribed Superfeet berry insoles to them) feel a little more supportive, which I like.  But they are also comparatively heavier.  For shorter training runs, I don't think it makes a huge difference - but over 26.2 miles I think everything will make a difference.

(NOTE TO SELF: Pick up a racing suit like the below.  Anything to improve my aerodynamics.) 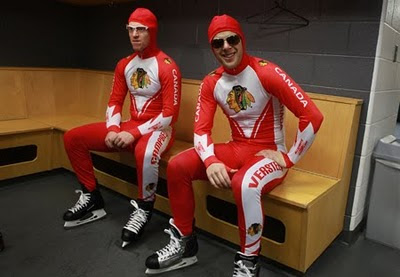 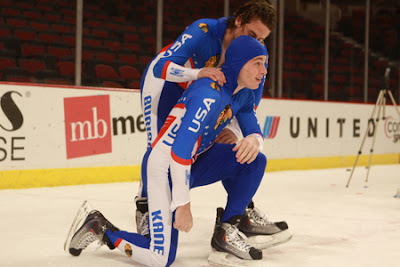 (In case you're wondering, these are from an episode of Blackhawks TV from a few years ago.  It's some of the funniest television known to humankind for all Blackhawks fans.  And yes, I am anxiously awaiting the start of the 2012-2013 NHL season even though it is months away.  But I digress.)

I've heard many folks talk about the feeling of running while wearing bricks on their feet.  Is this the reason that doing a combination workout of two triathalon activities is called a "brick workout" - because of how heavy your legs must be afterwards?  Speaking of wearing bricks...
﻿