Yesterday was my second running of the CARA Lakefront 10-Miler.

I ran this race last year and found it to be very well-organized, not to mention very affordable.  The best races, I think, are ones that are organized by runners themselves.  And this race definitely takes the cake in that aspect.

Going into this race, I did not have as strong of a training base as I would have liked.  Up until this past week, I have only been running twice a week - one 3-mile speed session during the week and then a long run on the weekends.   Even with this, I've still taken several more stepback weeks and rest days than I normally would.  This is due to concern over my left ankle, which is starting to get wonky.  So I wasn't sure how this race would go but I was just hoping to get to the finish smoothly.

Erin was using the race as her last training run before the Illinois Marathon next weekend, so she offered to run with me.  She and Jason came by to pick me up enroute to the race.  As we pulled into the parking lot, we were greeted by this:

Yes, folks, that was the biggest pothole I've ever seen in my life, big enough to swallow a garbage bin.  At what point does a pothole stop being a pothole and start turning into a sinkhole?  After seeing this video chronicling the attack of the giant sinkhole, we decided to avoid parking or lingering near the scene.

Here are some pictures of Erin and me pre-race. 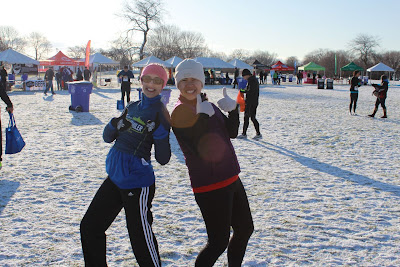 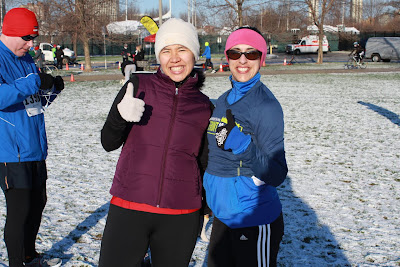 The race weather forecast called for temperatures in the low- to mid-30s.  It had also snowed the night before, as you can see.  Maybe someday spring will really get here.

The race itself was pretty uneventful - no unusual runners/spectators and no unusual observations.  Erin let me set the pace with a 9:1 run/walk ratio, while walking through all of the aid stations.

Here is a picture of us that I think was taken close to mile 2: 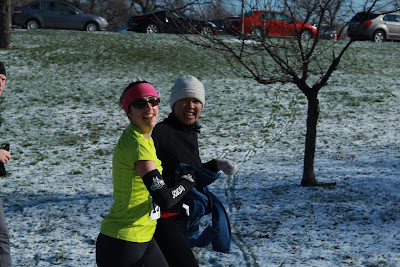 Around mile 2.5 was the infamous Cricket Hill.  Here's a picture of us coming down it: 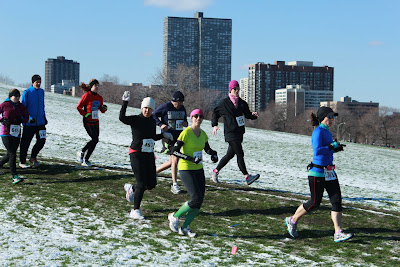 I was nervous about how my ankle would hold up.  I did roll it a couple of times along the course, but it didn't bother me too much.  Instead, my conditioning ended up being more of the limiting reagent.  I started getting tired during mile 7.

I was trying not to think about it, but I started getting that feeling of dread for what the last few miles had in store for me.  Erin helped pull me through it.  She did a great job keeping our conversation going, even though I was having some difficulty talking.  It helped distract me from the fatigue.

Despite not being able to see the finish line until we were nearly upon it, I did manage to pick up some speed in the final mile.  My official finishing time was 1:46:32.


Here are our splits.  I thought for sure that we'd end up with a majorly positive split, but in the end it actually ended up being pretty even.

It was nice to shave off about 2 minutes from last year's time.  Admittedly, I did think that my recent 8 weeks of speedwork would make a more visible difference.  But no complaints.  I enjoyed the festivities and the energy of my fellow runners, and it felt good to get the first race of 2013 under my belt.  Many thanks to Erin for running with me and keeping me going during those tough miles.