Guest Post: A Runner's Life in Chicago and in New York

Thinking about living in, traveling to, or running in Chicago or New York?  I am super excited today to share a guest post from Erica over at Erica Finds on what it's like to live the running way of life in both cities!

Erica is originally from New Jersey and now lives in Chicago.  Here she shares her thoughts and perspectives on the regional differences she's experienced while participating in the two running communities. (And wow, does it make me realize some of the things that I shouldn't take for granted.  Who knew?!?!?)

Many thanks go out to Erica for this post.  Enjoy!

One of the first things people learn about me is that I love running. I try not to be a “runnerd” (spewing splits, coaching advice and nutrition tips). I just love to run and am so energized about it that I have had many a friend or co-worker give it a try despite “not being a runner.” I have proudly helped many a friend train for and pace a first race (or first distance). I have many happy memories (and tons of friends) found on the run. 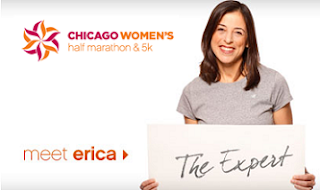 I have also run 200+ races in the last 18 or so years. Last winter, I was selected for a “real runner” campaign by Fleet Feet Sports for their inaugural Women's Half Marathon last June. They dubbed me “the Expert”! (I also got made up, put on cool posters and flyers, got free New Balance gear and shoes and 15 minutes of “fame.”)

That being said, I consider myself more of a blogging runner than a running blogger. I do write some posts on running including one this week.

Emily and I were chatting and she asked me a question that I have thought about, but that no one had asked explicitly before. Having always lived here, Emily asked, “What is the difference between runners here and in NYC? And other places you have lived or run?” I moved to Chicago from Brooklyn, NY in mid-2006.

I immediately started regaling Emily with stories and agreed to write this post. 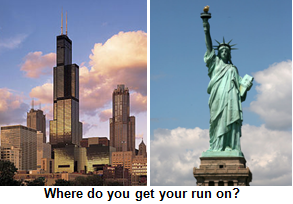 Key differences between Chicago Runners and New York Runners (in no particular order):

1. In the rat race that is NYC, each runner believes that he/she should start at the front. (Read: Get out of my way.) In 2006, I signed up for the Chicago Distance Classic Half Marathon. It was a beautiful cool morning. I went to the starting line and there was NO ONE standing near the 7 minute mile pace signs. A while later, 2 people came up. They were also from New York City. This is a true story. Here, people are polite – even in races they “stay where they belong.” I noticed this again at the Egg Shell Shuffle this weekend. I once had someone in the New York Marathon start to try to get ahead of me in the first women’s corral. I was number 600-something and she was number 500-something (it was in the top 1000 female corral) – I kid you not.

2. It takes a long time to become “real life” friends with your New York running friends, but in Chicago people just want to be friends – full out from the start. I ran with a group in NYC for years before we started going for coffee, inviting each other to parties, etc. In Chicago, I met runners in Fleet Feet Boston Bound training in 2007. When folks learned that my husband is not a runner, they invited us to a BBQ or beers or something. And then introduced us to their social circles. This is a key difference between Chicago people and NYC people but I found it with runners especially. Please note: New York runners are some of my closest, dearest and most loyal friends. It just takes longer for them to let you in. Once they do you’re family. Note: the one exception to this is in races. See #3.

3. Ironically despite the rat race in NYC, I have found that runners in Chicago are more competitive and less likely to become race companions. Again, this is only my experience, but in NYC, I ran countless races with my running partners and we finished together time and time again. Occasionally, we’d split up if someone was having a great day or a bad one, but in general we were in it together. Here, despite folks being Midwest nice, folks like to come in ahead when they can. No offense intended to any Chicago runners – again – just my observation for me!

4. You may have noticed, there are NO hills in Chicago. People here have to drive out of town to run hills. It’s just strange! I am still not used to it.

5. Runners in Chicago are obsessed with the Boston Marathon and the Boston Marathon jacket.
I ran Boston five times. Four when I lived in NYC (or Philly) and one when I lived in Chicago. I never considered buying a jacket or any gear at all. When I trained here, that was all people talked about and I think almost everyone I went with purchased the jacket. The BQ is a prominent discussion topic and worry for many more Chicago runners that I know than NYC. If the NYC people want it, they keep it to themselves more.

6. Everything is more expensive in NYC than Chicago except races. Races here focus on premium giveaways and locations. The races here cost more (except NYC ½ and NY Marathon which both cost an arm and a leg.)

7. This may be a result of the advent of many more running blogs and sharing websites like Daily Mile, but runners I know in Chicago seem much more obsessed with the numbers. People share and compare stats of all kinds. How far? How fast? How much speed work? How many calories? How many rest days? What was your heart rate? How many rest days? And on and on. I have never been asked, “was that a PR?” more times than since I have lived here. “No, it was not. Not likely. Not anymore.” (In case you are wondering!) In NYC, in running as in life, people keep the details to themselves.

I will acknowledge that New Yorkers are generally known for thinking that they and their city are the center of the universe. Even former NYers like me can be guilty of that, so please excuse me Chicago friends if it happens! I met someone in the Egg Shell Shuffle who was also a transplant from NYC. We were discussing the differences between life and running in NYC and Chicago and we both agreed. Life and running are great in Chicago – especially after you stop comparing them to NYC!

What is your experience with running in Chicago versus other cities?
Posted by emmers712 at 2:56 PM