I am late in making my NHL third-round playoff predictions due to time spent dangling from stainless steel rods, among many other things.  But better late than never!  (This is probably the one and only time that I will ever publish two blog postings in one day, too.)

Before I begin, two things.  Number one, I am as diehard of a Blackhawks fan as you'll ever find, but I continue to have the utmost in respect for the Detroit Red Wings.  The Wings are an incredibly talented, resilient, classy, and hardworking team who make the game better by being in it.  I wish the Wings well in the Eastern Conference next year, but I will very much miss the Blackhawks-Red Wings rivalry.  I look forward to the NHL either bringing the Hawks and Wings rivalry back to spark in the future, or to a Hawks-Wings Stanley Cup Finals series some day.  That would be epic!!!

Second, I just had to share a few hilarious Blackhawks-themed media clips that make me giggle like a schoolgirl every time I see them.

First, this hilarious gif of Michael Frolik celebrating his penalty shot goal in Game 6 against the Red Wings:


His penalty shot ended up being the game-winner in Game 6 and kept the Blackhawks alive in the series.  As others have said, if that isn't worth infinite celebration, what is?!?!?

I also couldn't resist bringing this classic holiday-themed Blackhawks video back up:

SO HILARIOUS.  I can only imagine how much time, creativity, and preparation it must have taken to put this video together.

As it pertains to this year's Hawks playoff series, many Hawks fans in the know have been quoting two lines from this video:

And finally.  This video has nothing to do with this year's NHL playoffs.  But this is a classic flashback from the past that makes me roll on the floor laughing every time I watch it.  God bless the person that found this video!

"Not his knee, maybe his wee knee!"
OK﻿!  Let's get down to business here.

#1 Pittsburgh Penguins versus #4 Boston Bruins
This is quite a matchup and both teams will have their hands very full dealing with each other.  At the outset, Boston is lucky even to be here given how ridiculously close they came to losing the first round against Toronto.
While the Bruins are built tough with great skill, injuries have started becoming a factor with them in recent weeks.  Conversely, the Penguins are not reporting any injuries at the moment.  However, it seems that the Pens my not have not quite reached their highest playing level yet, though, especially after some comparatively easier matchups in the first and second rounds of the playoffs.  It's going to be interesting to see how things shake out in in the Penguins' net with Tomas Vokoun and Marc-Andre Fleury, but so far so good.
Both teams have extremely talented top-line forwards, so I think that both teams' depth, defense, goaltending, and special teams are going to really come into play in this series.  I keep hearing about how the Bruins are very dominant at face-offs and how much of a difference-maker this can be.  But the Penguins' offensive talent is stunning and I think Boston is going to have a tough time containing the likes of Malkin, Crosby, Neal, Iginla, etc., etc.
Yes, I am biased, very biased, because of Adam's Pittsburgh roots.  But I do truly believe in the Pens.
Prediction: Pens in six.

#1 Chicago Blackhawks versus #5 Los Angeles Kings
No offense to any Kings fans out there, but I am reaching my limit when it comes to all of this talk about Jonathan Quick being invincible.  Yes, he is a strong goalie.  But at the same time Jonathan Quick is human just like the rest of us, meaning that he does NOT walk on water.  (Okay, okay, Adam pointed out that ice is frozen water, ergo Quick skates on the ice, ergo Quick does walk on water.  But that's besides the point.)
I have also grown weary of those teams exhibiting brutally physical styles of hockey play highlighted with grinding halts and neutral zone traps whose games always end with a score of 2-1.  Who enjoys watching games like that?  I will take watching the fast, finesse, skill teams like the Hawks anyday over the physical grinders like the Kings.  (Are you listening to me, St. Louis Blues, Nashville Predators, New Jersey Devils, and other unnamed assailants!?!?!?)
The Blackhawks are considered by many to be the underdog in the series.  A lot of people are looking at Jonathan Quick, in combination with the Kings' girth, to be the favorite over the Hawks' speed and skill.  But not me.  I am, as always, heavily biased towards my home team's talent, resilience, versatility, and character.
Prediction: Hawks in six. 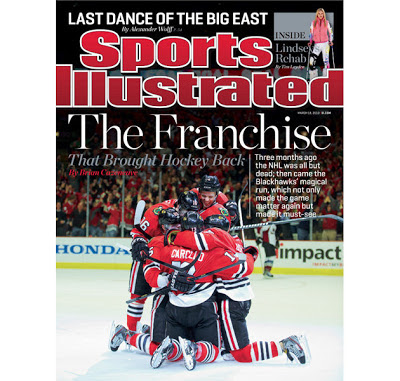 FINAL THOUGHTS
Friends, family, and regular readers of Adam's blog and/or my blog will realize that yes, I am predicting the DOOM scenario (aka a Stanley Cup Finals matchup between our two favorite teams).  Let me be clear that I began predicting this scenario not one, not two, not three, but FOUR years ago.
DOOM is going to happen.  It's is inevitable.  It is just a question of when.
So what's a Hawks fan to do? 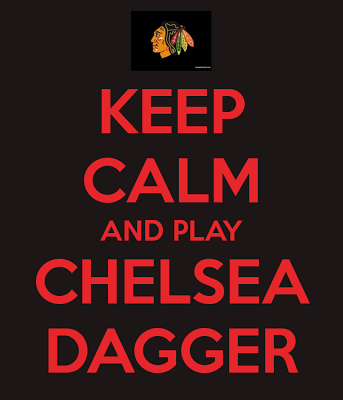