Last weekend I ran the PAWS Run For Their Lives 8K.

This was my third consecutive year attending the event and my second year running the 8K. (Last year I did the 4K walk, since I ran a half marathon the day before.) This event is one of my very favorite races and has become a must-do for me every year. (Check out my recaps from 2012 and 2013.)

Proceeds from this event go towards homeless pets and animal welfare in Chicago. As I've said many times, this is a cause that I wholeheartedly support. I am especially reminded of this each year when I arrive at the race site and see the hundreds of happy dogs enjoying the day!

This year, the PAWS organization was attempting to break the Guinness world record for most costumed dogs in one location. As a result, everywhere you looked there were dogs dressed in darling little outfits. Here are a few. (Adam took some of the pictures that I am sharing in this post, but most of the photos are courtesy of Jason):


PAWS hasn't announced yet whether or not the event successfully set the new world record. Regardless, it was fun witnessing the attempt!

I'll talk first about the race itself. Then, I will share more dog costume pictures. =)

We've been getting an onslaught of insanely fog-covered days in Chicago this summer. (Blame it on last winter's polar vortex, apparently.) As timing would have it, Chicago was under a severe-fog advisory on the morning of the race. I woke up to see this view from my balcony: 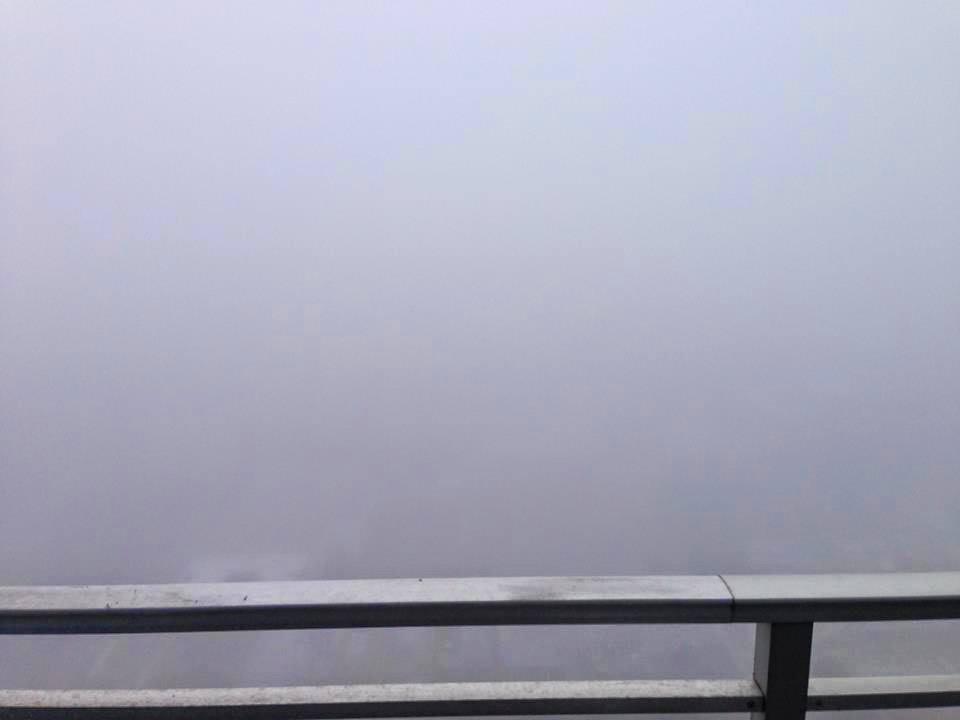 The temperature was pretty good, at least, for a late-June race. It was forecasted to be in the upper 60s/lower 70s during race time.

Adam and I navigated the fog-cover and drove to the race site at Montrose Harbor, where we met up with Erin and Jason.

On a related note, Erin just adopted a dog named Chewie a couple of weeks ago! I got to meet him earlier in the week and he is adorable. Check out some pictures of him here. Erin had been debating whether or not to bring him to the event. However, Chewie is shy and still trying to get used to his new home and surroundings. Therefore, she opted to let him relax at home. Maybe next year!

Here's a picture of Erin and me before the start: 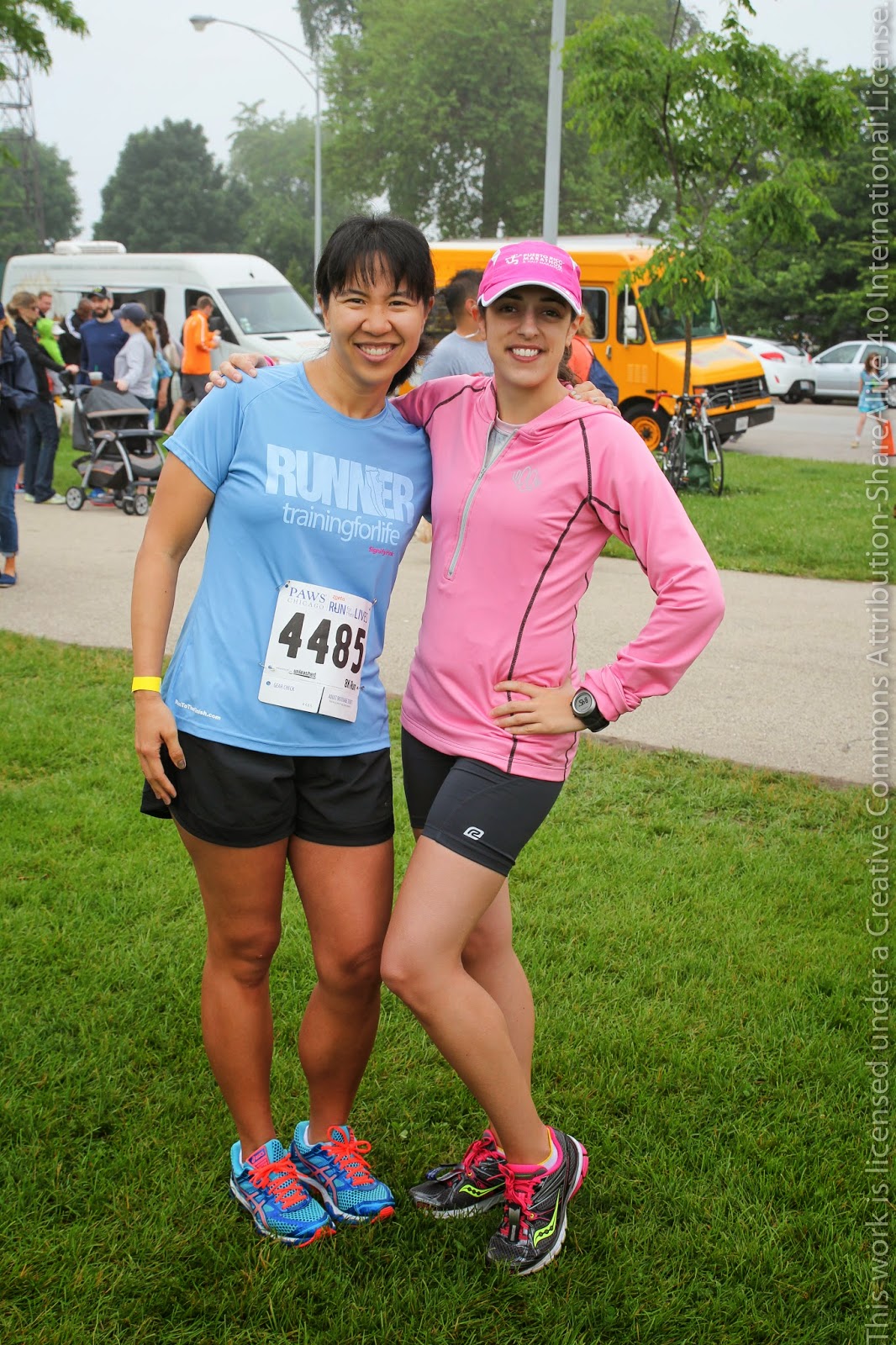 Erin and I lined up at the start line about midway through the pack of runners. I asked Erin if she had any time goals for the race, and she said no. I didn't really have any major goals for myself, either. Although, I was thinking that it would be nice to beat 44:12, which was my time from when I ran this race two years ago. However, it wasn't an entirely level playing field. In 2012, the race took place in late September when I was at the tail end of my training cycle for the Chicago Marathon. The temperatures were much cooler on race-day in 2012, as well. I wasn't brimming with confidence that anything spectacular would happen this day.

(I have actually been feeling pretty spooked these days about shorter-distance races in general. But, that's a topic for another time.)


The starting horn blared and the crowd slowly started moving forward. Here's a picture of Erin and me right after we crossed the starting line: 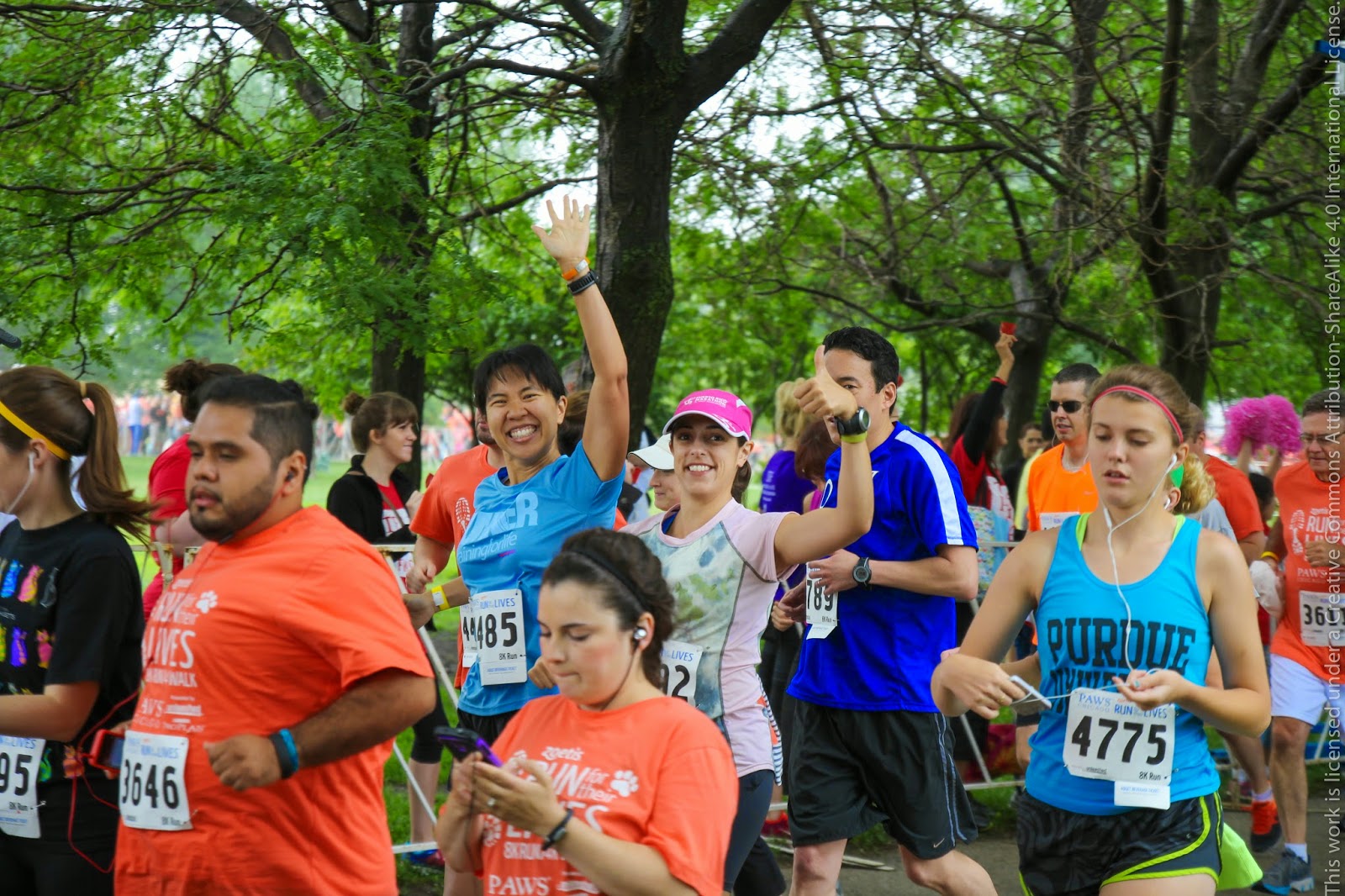 The path was packed at the beginning and we were all pretty hemmed in. I tried not to waste too much energy bobbing and weaving. Erin had more success working her way through the crowd and within a few minutes she zipped ahead.

It was very humid and the fog was so thick that it felt like we were running through a stream of mist.  I wasn't feeling particularly great, but I was doing okay.

Initially, my left piriformis and hamstring were feeling sore and tight. Both have been persistently troublesome for me for the past several weeks. Clearly I need to spend more time stretching these areas out. Much to my relief, things did start loosening up after a couple of miles.

The race took place on the lakefront path, which was not closed to the public. We were all trying to be cautious of bikers and other folks on the path who were not part of the race. I saw a number of near-misses. (Not surprisingly, some folks got into some heated debates about who had the right-of-way and who should be watching out for the other.)

The course was an out and back which passed by one aid station twice. I opted not to stop either time. As I approached the course turnaround, I looked for Erin but did not see her.

My splits for the first four miles were pretty even. As I approached the Mile 4 marker, I looked down at my Garmin and realized that I still had a chance to break 44:12. It would be close, but it was doable. I tried to speed things up.

Adam, Erin, and Jason were all standing near the finish line and they cheered me on as I approached. Here's a picture of me as I was sprinting towards the end: 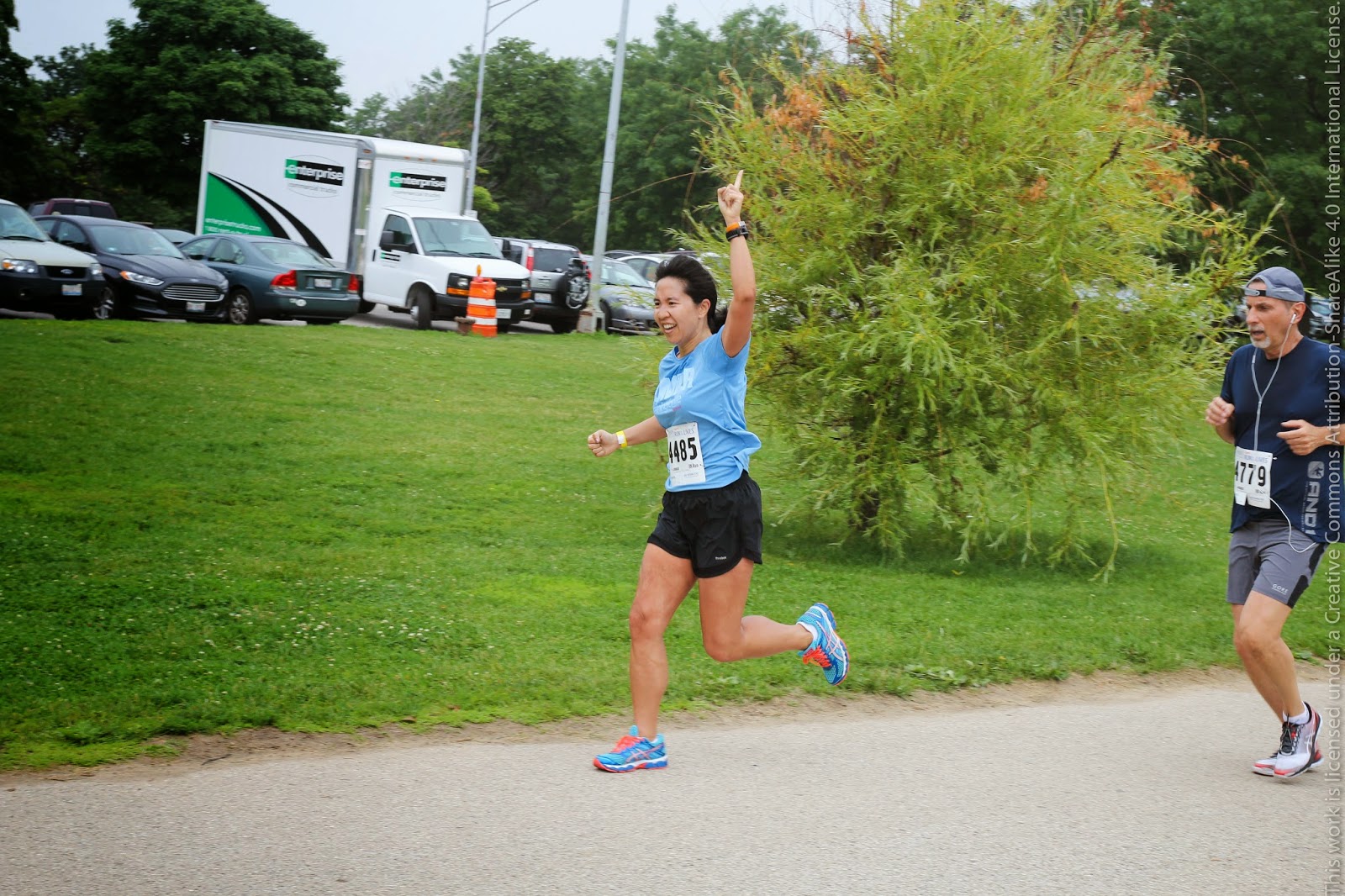 Here are my splits:

My official time was 44:16. Just four seconds slower than my time from 2012! In retrospect, I know that I could have pushed just a little harder to meet that goal. Grrrrr. Ah well.

After getting some water, I met back up with Adam, Erin, and Jason. I had made a donation to PAWS along with my race registration, which gave me access to the VIP Life Saver Lounge with post-race refreshments. I made a quick stop to check it out. On top of the usual water and sports drink, they were serving fruit salad, muffins, pizza, pasta, gourmet pretzels, and adult beverages with keepsake mason jars. They were also handing out doggie treat bags which included what appeared to be the canine version of an energy gel. Who knew there was a market for doggie "GU"? Very interesting, to say the least.

Now, time to get back to sharing pictures of dogs in costume!

While Erin and I were on the course, Adam and Jason had walked around the premises taking pictures for us. I am sharing just a handful of their photos here.

I noticed a few costume themes in general. For example, there were lots of dogs in dresses/tutus: 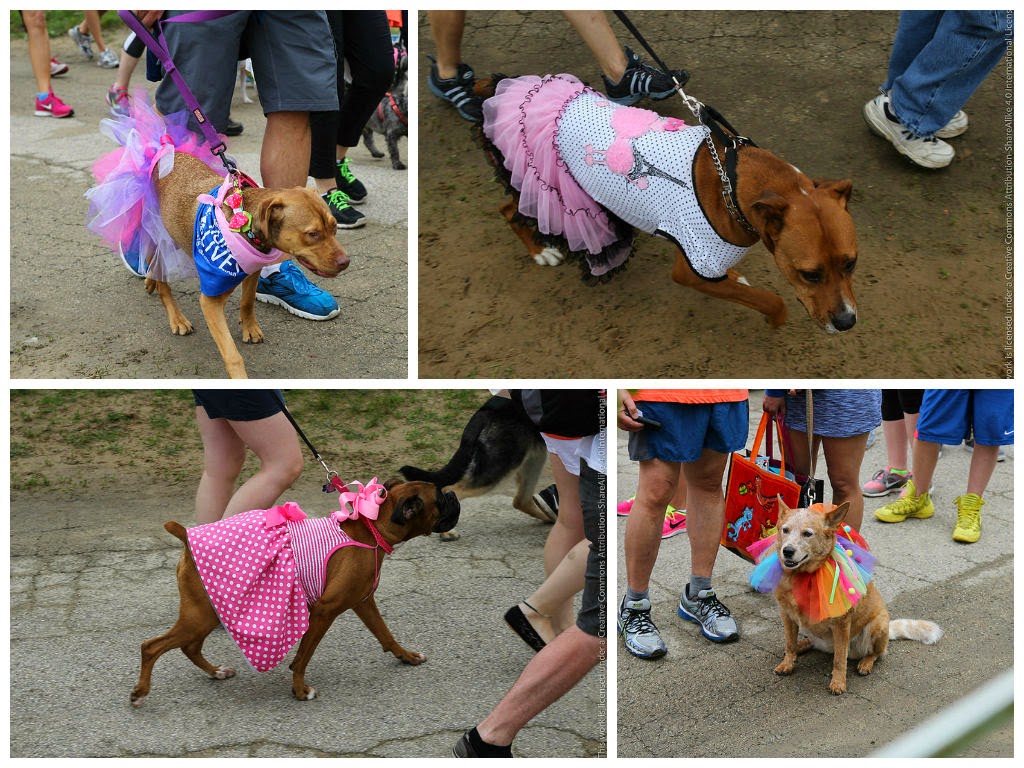 
Many dogs were out enjoying the ride: 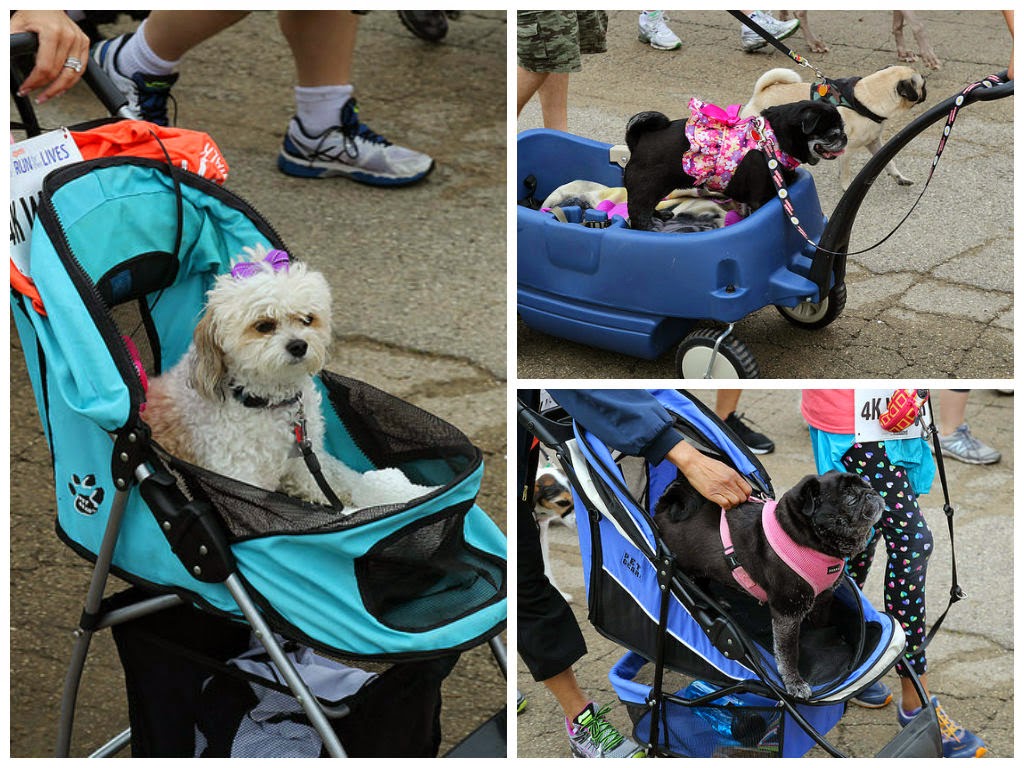 And many dogs looked like they were ready to be heroes for all of dog-kind and human-kind:

Super cute and adorable! Many thanks go out to Jason for sharing his amazing selection of photos.

Here's one last set of photos:


This race was a great time, as always. I am looking forward to participating again next year for the fourth consecutive year. For all pet-owners and animal-lovers out there, this race is for you!