Top of the mornin' to y'all! I was up late last night watching the Blackhawks' come-from-behind, double-overtime victory over the Predators. I won't kid you, I was a little delirious afterwards. Clearly I need to rebuild my hockey fan endurance for watching these 4- or 5-hour playoff games. =D 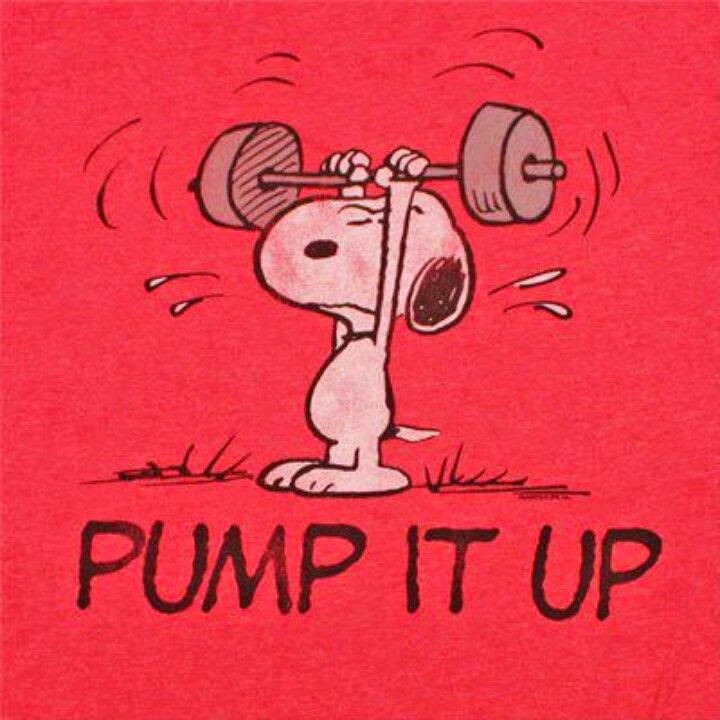 That being said, the timing couldn't be more perfect for me pump out some rambles and link up with Amanda's Thinking Out Loud Thursdays!

Word Puzzles
On Tuesday night, Adam and I were looking through his high school senior yearbook (he went to Mount Lebanon High School in Pittsburgh).

Check out his yearbook's cover design: 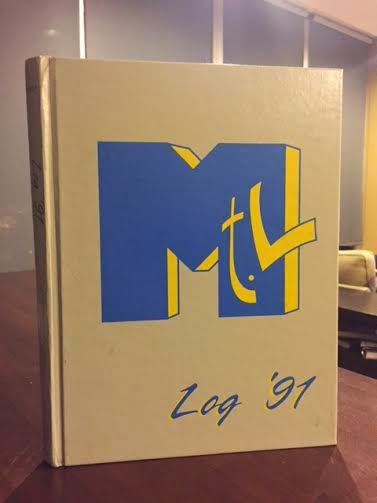 The theme is MTV, with a clever conversion to MTL - which stands for Mt. Lebanon. So ingenious!

Adam and I were flipping through the pages, admiring all the mullets and mall-chick hair. There were a lot of music quotes strewn amidst the pictures, to which Adam commented, "I wonder who gets to pick those out every year?" I mentioned that I thought the altered MTV logo was a neat take-off on the Mt. Lebanon letters.

He looked at me quizzically and said, "Is it?"

I said, "Yeah!" and reiterated the symbolism.


Adam looked very surprised. He said, "You know, in all of the years I've had this yearbook, this is the first time I have ever noticed that."

To put this into context, this yearbook was published 24 years ago. So it has taken Adam 24 years to understand the meaning behind his yearbook's logo and theme.

Spirited
I finally watched Spirit of the Marathon this past weekend. WOW. What an amazing documentary with so many contrasts. As expected, it was very emotional for me to see the personal stories and journeys unfold. The features and scenes on Kenya were very eye-opening, too.

On a side note, it was interesting to see how much has changed since the movie was filmed in 2005. Back then, the marathoners had to return their timing chips after crossing the finish line. There wasn't any security at the starting corrals. Nobody wore compression socks or any fancy gear that I could see. Everyone wore white running shoes.

It's too bad the film didn't get into specifics regarding the training plans. It would have been cool to see how endurance training philosophies have evolved over the past decade. (Does anyone have any thoughts on that?)

Shoegate
Speaking of changing running shoes, remember when I mentioned the new shoes I was considering?!?

Say hello to the two newest additions to my running shoe collection!


I wasn't originally planning on buying two new pairs at the same time. Really, I wasn't. But Amazon had an amazing one-day sale on the Mizunos, and Running Warehouse was running a great promotion on the Sauconys. I couldn't resist.

Can't wait to start working the newbies into the rotation!

Ooopsie
Speaking of that Running Warehouse promotion - it is supposed to be good for a $20 discount off of a future Saucony purchase of $50 or more. However, in reading the gift card's fine print, it looks like somebody goofed! Check it out: 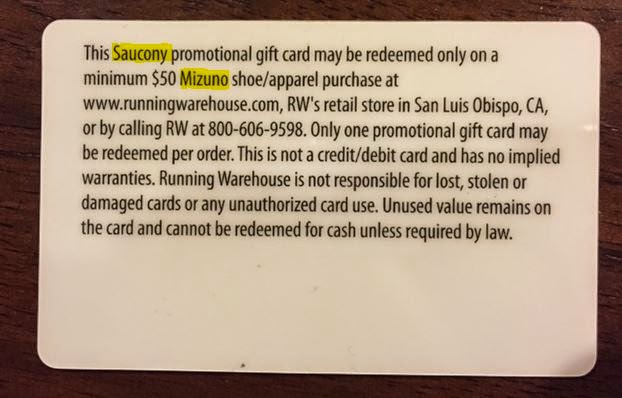 I wonder what Running Warehouse would do if I actually wanted to apply my Saucony gift card to a Mizuno purchase? Technically, they would have to honor it, right?!?

--
Allright, I think that's enough nonsense for now. Happy Thursday to all! Tell me what plans you have for the upcoming weekend!?!?
Posted by emmers712 at 5:00 AM