History of my favorite Blackhawks and Penguins players

After writing about my current two favorite NHL hockey players, Artemi Panarin and Olli Maatta, it made me contemplate their similarities. In addition to those two, I looked for common threads across my favorite hockey players in prior years. It turns out there are characteristics I always like, but there are many differences, too.

I decided to share more details about all of my favorite Blackhawks and Penguins players, both past and present. The players are presented in chronological order. 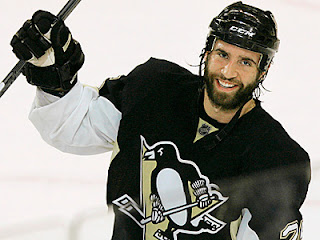 Team and Number: Pittsburgh Penguins #25
Position: Center
Hometown: LeMoyne, Quebec, Canada
Years as a favorite: 2008-2011
Funny videos: I'm going to share two local Pittsburgh car commercials from an ad series starring the "Superstar."
Part I:
Part II:
Reasons Max was a favorite:
He is a grinder who raises his game to the highest levels when it matters most. He is extremely charismatic and humorous, while also being very humble and hard-working. His upbeat, fun personality lights up the room - I feel that you cannot help but smile when you are in his presence. He brings incredible energy and passion to the team, and his character and heart are both truly second to none.
My favorites of Max's accomplishments:
Scoring the team's only two goals in Game 7 of the 2009 Stanley Cup Finals vs. Detroit, which clinched the Penguins' 2009 Cup victory. Getting into a pivotal fight during a playoff game against Philadelphia where the team was trailing 0-3. After the fight he gave the crowd a "shhhh" sign, which helped the Penguins seize momentum and come back to win the game. 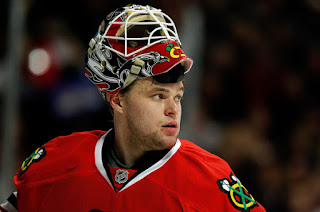 Team and Number: Chicago Blackhawks #31
Position: Goalie
Hometown: Vantaa, Finland
Years as a favorite: 2009-2010
Funny video: Getting the puck lost in his pads during the 2010 Stanley Cup Playoffs:
Reasons Antti was a favorite:
He rose from obscurity to reach the NHL. The year before he came to the Blackhawks, he was in Finland driving the Zamboni after practices to help make ends meet. I've never seen anyone who was so unflappable in the face of adversity or when dealing with the many setbacks he experienced early in his career. He quietly fought his way to the top via hard work, patience, and tremendous perseverance. From what I understand, he's a very funny guy, too.
My favorites of Antti's accomplishments:
Being amongst the league-lead in regular season shutout victories his first year, despite playing a considerably lower number of games than the NHL's other leading goaltenders. Playing a pivotal role in helping the Hawks win the Stanley Cup in his first NHL season. 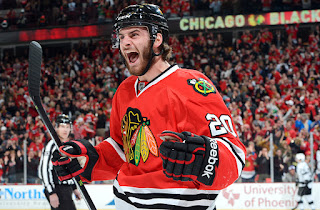 Team and Number: Chicago Blackhawks #20
Position: Left wing
Hometown: Pittsburgh, Pennsylvania
Years as a favorite: 2012-2015
Cool personal picture: Out of all my favorite hockey players, Brandon is the only one I've ever had the privilege of meeting in person. This happened back in 2013 and my recap of the experience is here.
Reasons Brandon was a favorite:
At a very young age, he played with tremendous strength and confidence. He displayed a level of maturity much greater than his age both on and off the ice. During his time with the Hawks, he was what Adam would describe as a true Pittsburgh guy, meaning he never forgets his roots and where he came from.
My favorites of Brandon's accomplishments:
Coming in as a rookie and playing fearlessly and powerfully on the Blackhawks' first line with Jonathan Toews and Marian Hossa. Most rookies would be intimidated by playing alongside those two future Hall-of-Fame linemates, but not Brandon. Helping the Hawks win the Stanley Cup in his rookie year, then doing so again two years later with massive impact. 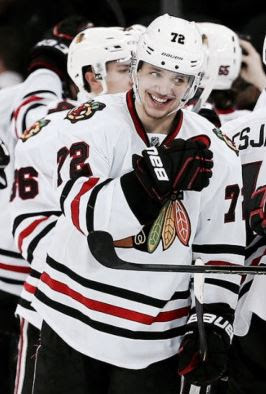 Team and Number: Chicago Blackhawks #72
Position: Left wing
Hometown: Korkino, Russia
Years as a favorite: 2015 - present
Intriguing video: A Russian TV feature taking us into Artemi's apartment and chronicling his adjustment to Chicago. The video is in Russian with English subtitles.
Reasons Artemi is a favorite:
I wrote a little bit about my reasons in this post, but I'll get into further detail here. I love the dazzling, jaw-dropping skills on the ice. The very frequent grin on his face. The humble, humorous, fun-loving, and endearing personality. Playing with unabashed excitement, including the giant hugs he gives his teammates in celebration. Coming to Chicago from Russia and not knowing the language, culture, team, or league, yet making the transition look completely effortless and enjoyable.
My favorites of Artemi's accomplishments:
Making Patrick Kane a better player, which is really saying something. Leading all NHL rookies in points by a landslide. I believe he will win the Calder Trophy for best rookie this year. 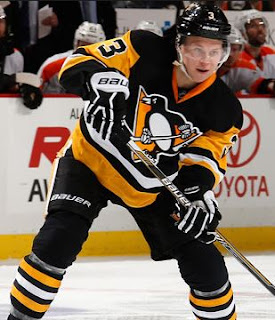 Team and Number: Pittsburgh Penguins #3
Position: Defenseman
Hometown: Jyväskylä, Finland
Years as a favorite: 2016 - present
Cute video: I would embed this video directly here if I could, but it's from the Penguins website so I can only create a link. It's a fun synopsis of Olli and teammate Derrick Pouliot surprising fans at a local McDonald's. Here's a screenshot: 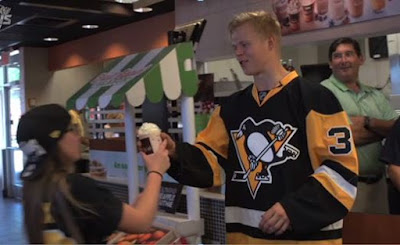 Reasons Olli is a favorite:
Again, I wrote a little bit about my reasons in this post, but I'll get into further detail here. Olli is amongst the most sincere, down-to-earth, relatable, and thoughtful hockey players I've ever seen. I think he would be a very loyal and caring friend. He's only 21 but he's already been shining as a top defensive-line player for several years. He also displays an unbelievable level of maturity both on and off the ice. I was nearly brought to tears by witnessing his incredible poise during his battle with cancer.
My favorites of Olli's accomplishments:
Undergoing surgery to remove a potentially cancerous tumor from his neck, then returning to the Penguins line-up just two weeks afterwards. I saw some very touching photos of Olli wearing a purple jersey during Hockey Fights Cancer Month. Not committing to playing organized hockey until the age of 14 - and only two years later becoming the youngest-ever player to play for Finland's World Junior Team.


Linking up with Mar, Cynthia, and Courtney for the Friday Five. 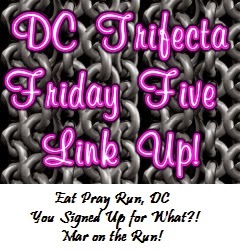