Brace yourselves, folks - NHL playoff season is upon us starting tonight. It's the time of year when I metamorphosize into one of those crazed hockey fans that stays up watching games until all hours of the night.

At some point, the hardest-core fans will probably be so sleep-deprived that they might as well wear their pajamas around the clock. E.g.:

Ready for my annual attempt to moonlight as a hockey writer and spin the hockey brackets? Below are my first-round predictions.

Here is my obligatory disclaimer that I have strong bias in favor of the Blackhawks and the Penguins. I am not even going to try to hide it. As I say every year, please feel free to email me or comment if you want to let me know how wrong you think I am on any of my predictions.

Washington Capitals vs Philadelphia Flyers
This year, the Caps ran away with the President's Trophy for best regular-season record in the league. However, it's pretty rare for President's Trophy winners to win the Stanley Cup. I believe this correlates with a lack of proper pacing during the grind of the extremely long NHL season. (In the salary cap era, only two teams have won both in the same year - and the Blackhawks did so in a lockout-shortened season.)

In my opinion, the Capitals are the epitome of the team that pushed too hard during the regular season and overplayed their starting goaltender (Braden Holtby). They appear to have taken their foot off the gas pedal over the last month, and it's hard to flip a switch when the playoffs begin. They also have a history of some early exits. Comparatively, Philadelphia has been playing with purpose and momentum after battling hard just to get into the playoffs. The Flyers already have their game on. Philly will also be playing with extra motivation after the recent passing of the team's owner, Ed Snider.

Most hockey experts heavily favor the Capitals, but I think this series has upset potential.

Pittsburgh Penguins vs New York Rangers
The Pens' lineup has been riddled with injury. At the close of the season, they were playing without Evgeni Malkin, Olli Maatta, and Marc-Andre Fleury. Yet, over the last month the team pulled together a torrid mass of wins, decimating their opponents one after another. Imagine how scary the team would be if they had all of those guys healthy - and early reports indicate many will be back soon. Time will tell if the team is just on a ridiculous hot streak or if their level of play is for real. Either way, right now the Penguins are a tremendous force to be reckoned with.

On the Rangers side, I heard reports of Henrik Lundqvist leaving practice early this week. All kinds of rumors are now swirling around about him being hurt. I'm also hearing captain Ryan McDonagh has a broken hand. On top of everything, the Rangers have mortgaged their entire future to go all in this year. However, I don't think their moves (e.g. adding Eric Staal) will be very impactful.

Prediction: Penguins in five
Florida Panthers vs New York Islanders
I have limited knowledge on both of these teams. The little I am familiar with includes the former Blackhawks players that have gone to both teams, the goaltenders, and Jaromir Jagr still playing in Florida at age 44 (!?!?!?!?!). Would you believe Jagr's two linemates's ages combined is still younger than he is? I don't have an enormous amount of trust in Panthers goaltender Roberto Luongo, mostly based on what I saw of him when he played in Vancouver, but he does have a lot of experience.

From the Isles side, I understand they started trending downwards during the last few weeks of the season. Their starting goaltender, Jaroslav Halak is out with an injury. This means they'll be playing a career back-up goaltender.

I don't think either of these teams are Cup contenders, but:

Tampa Bay Lightning vs Detroit Red Wings
Tampa has had a rough year with all the Jonathan Drouin drama, Anton Stralman being out with a fractured leg, and learning Steven Stamkos is out 1-3 months with blood clots. Yes, Tampa went to the Finals last year. Even so, I think the injury blows are too significant for them to overcome - especially at this point in the season.

The Red Wings squeaked into the playoffs for the 25th consecutive season, which is a huge accomplishment. They've certainly got the veteran experience, but the team also has a lot of tread on its tires. I heard rumblings about the Wings playing like a team who was more interested in short-term goals than a long Cup run. It has to be a huge blow to them to know Pavel Datsyuk is leaving after the playoffs - but that's another story. Do they have a goaltender controversy between Jimmy Howard and Petr Mrazek, too? In any event...

I thought this was hilarious! (For those of you not familiar, Artemi Panarin moved to the US from Russia last fall, and he's been trying to learn English) 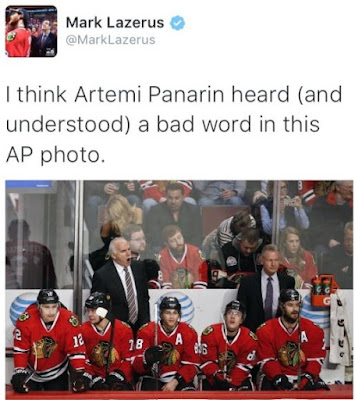 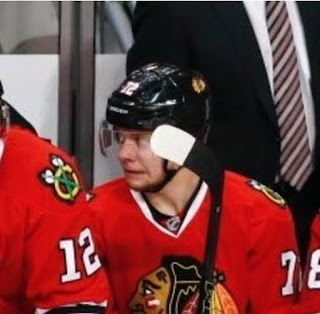 We now return to your regularly scheduled programming.

Dallas Stars vs Minnesota Wild
There's been a lot of talk about Dallas's dual goaltending approach, as opposed to having a starting goaltender. I don't necessarily think it's a drawback for them, to be honest. What I'm more focused on is the team's lack of playoff depth experience (with the exception of former Blackhawks Patrick Sharp, Johnny Oduya, and Antti Niemi, of course). I thought they would meet their demise with Tyler Seguin on injured reserve for an extended period of time, but they continued to play well. I think they are talented, but they need a little more seasoning to get to the top.

In my opinion, Minnesota has been very Jekyll and Hyde. There are times when they've looked unstoppable, and other times when they've struggled mightily. Changing coaches this season did seem to spark them a little. However, they have by far the lowest point total of any playoff team. They lost their final five games of the regular season. I don't have a lot of confidence in Devan Dubnyk, and I heard Zach Parise might be out the entire playoffs with a back injury. Ouch.

Chicago Blackhawks vs St. Louis Blues
The Blackhawks have had major injury problems over the last few weeks. After a stretch of alarmingly mediocre play, the team appears to have righted the ship. Their full line-up, most notably Corey Crawford, is expected to be healthy for the playoffs. The special teams, particularly the penalty kill, have improved drastically since Marcus Kruger's return. In my opinion, their forward depth is unparalleled, and the Kane-Anisimov-Panarin line is unstoppable. I am thrilled to see Andrew Ladd back in a Hawks jersey. Defense is not as deep compared to prior years, but the team did also win the Cup last year basically only playing 4 defensemen. In short, there are many reasons this team has won 3 Cups in the last six years.

I am not a fan of the Blues' style of hockey. They slog around clogging up the neutral zone, throwing all five guys in front of the net, and basically sucking the living soul out of the game. In my opinion, they are a team that tries to win by destroying the opposition's skill rather than creating plays of their own. They also have a goaltender controversy (as it seems they do every year). Some folks say the Blues are better on paper, but I say:

Prediction: Hawks in six
Anaheim Ducks vs Nashville Predators
Anaheim is a scary team, in my opinion. They pushed the Blackhawks as hard in last year's playoffs as any team I've ever seen. Their forward tandem of Corey Perry and Ryan Getzlaff is powerful, and the team is strong and physical, yet deft offensively. After starting out the year 1-7-2, they've come roaring back in stunning fashion to win the Pacific Division. It's one of the most unreal comebacks I've ever seen during the regular season.

Nashville has some offensive talent, but I think they were burned by the Jimmy Vesey blowout. Hindsight is 20-20, of course, but I think it was risky to forgo trade deadline moves because of him. I will give Nashville credit for having some decent depth on defense. I think goalie Pekke Rinne is overrated, though.

Los Angeles Kings vs San Jose Sharks
The Kings terrify me. They are loaded with offensive and defensive talent, depth, strong goaltending, physicality, and experience. Their players are also mindblowingly resilient. No matter what, you can never, ever count this team out until the final series buzzer. There's a reason the Kings have won two Cups in the last four years. That aside, the Kings played an absolutely brutal stretch of hockey to close out the regular season. They played 16 games in 29 nights and I think it took a visible toll down the stretch.

I am not hugely familiar with the Sharks, but I know they are still going with the same core of Thornton, Pavelski, and Marleau that they've had for years and years and years. They are yet another team with a goaltending controversy. This match-up is made more interesting by the Sharks having had a 3-0 series lead over the Kings two years ago, only to lose to the Kings in 7. Surely revenge is on the Sharks' minds. Even so...

Speaking of the Kings, and since we are doing hockey-related Twitter humor today, I saw someone resurrect this from a few years ago. The Kings' social media team is really funny. 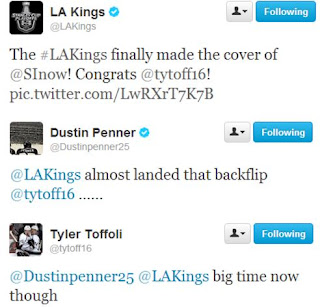 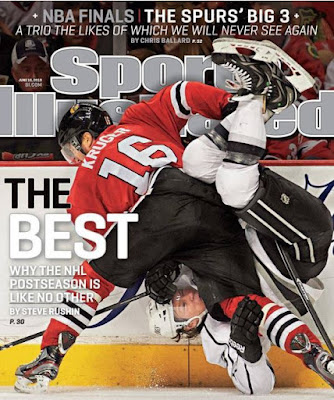