When I learned Mar, Courtney, and Cynthia were discontinuing their Friday Five linkup, I was bummed as it is one of my favorites. What a thrill to learn today that Fairytales and Fitness and Running on Happy started a Friday Five 2.0! 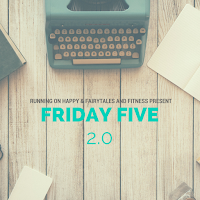 1) Gift card that keeps on giving
Six weeks ago, I received a $50 gift card to Roti, one of my favorite quick-service restaurants. Each time I go, my order totals around $9. Obviously that means I can use the certificate for about 5.5 orders. I've been using the card once per week.

Today I went to use the card for the sixth time, and had my credit card ready to cover any unpaid balance. Much to my surprise, they told me no balance was due. 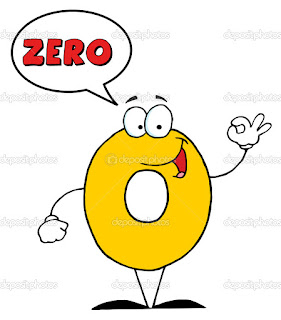 You better believe I didn't question it! I just said thank you and immediately headed out the door. =D

Back at my desk, I tried to look up my gift card balance/activity. The result? Error messages that the gift card number cannot be found. To quote Alice in Wonderland, "Curiouser and curiouser!"

I wonder if I somehow stumbled into a "bottomless" gift card? That would basically be the equivalent of hitting the lunchtime jackpot, in my opinion. Or maybe their system was just down? Who knows.

2) Going bananas
At yoga class today, our instructor had us do a new-to-us pose that she called the banana pose. It looks very similar to this: 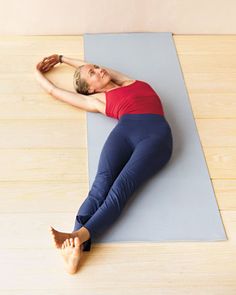 You can see the resemblance: 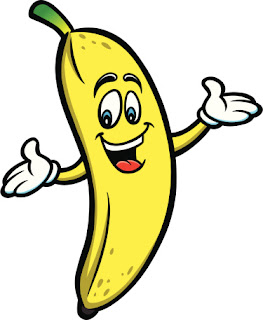 The banana pose made me want to giggle. It reminded me of a friend who was born outside of the US, and thinks the expression "going bananas" is a weird idiom. (Taken literally, I think we can all understand why, yes?)

Let's just say it's really hard to do yoga when you are trying not to laugh!

3) Hey L.A., whadya say?
This past Tuesday, Adam's colleague Reid gave us two tickets to that night's Blackhawks vs Flyers game at the United Center. Thank you, Reid!
For the second consecutive time, we got to watch the Cubs game on the United Center scoreboard in between periods. Always really cool. 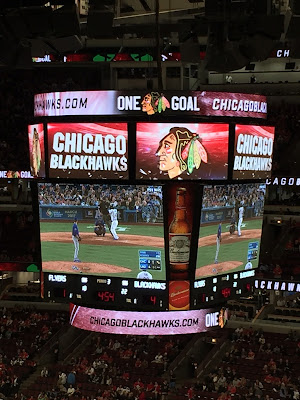 Reid has a known history of undergoing very last-minute travel to see our teams on the road. E.g., last year, he flew to Anaheim to watch Blackhawks-Ducks Western Conference Finals Game 7. I jokingly said to Adam, "Maybe the reason Reid is giving away his tickets is because he's in Los Angeles watching the Cubs?"

I found out later that Reid did not attend Tuesday's game. He DID, however, fly out to LA yesterday afternoon to watch last night's game! Apparently his flight landed at LAX around 3:00 PM, and the Cubs-Dodgers game started at 5:08 PM. Wow. Just wow.

That, my friends, is living on the edge!

4) I get a good feeling
The latest addition to my workout playlist is "Levels" by Avicii. I've heard it at seemingly every single race start line over the last year. It's also one of the songs that might get played at the UC when the Blackhawks are warming up.

Today I watched the video for the first time. The first half is really funny! It reminded me a little of the Office Space movie. Check it out:
5) Alaskan frontiers
Next Wednesday, I am headed up to Alaska to visit my best friend Vanitha. I am very excited to catch up with her!

This trip has really snuck up on me. I haven't done as much preparation as I would have liked. Thankfully, V is filled with great recommendations on things to see and do. 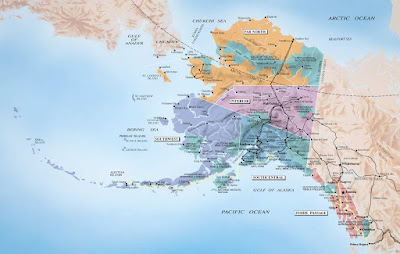 Also sneaking up on me is the Rock N Roll Las Vegas Half Marathon on November 13. Ideally I'd do two more double-digit long runs in preparation. The weekend of November 6 is a gimmee, and then I can choose either between this coming weekend or next weekend. From a planning standpoint, I've got family in town this weekend from Maryland, and next weekend I'll be in Alaska.

I'd really love to be able to do my long run in Alaska, but I know the wilderness and wildlife there is no joke. Essentially, I need to make a decision and prepare quickly, either way.