Half marathon #4 completed this past Saturday morning.  Official finishing time: 2:31:22.  Not too bad.  I wanted to finish sub-2:30, but it was a hot one out there (temps in the 80s) so I knew it wasn't going to be my best day.  All in all, though, the race was fun, with great support and a beautiful course, and I enjoyed the festivities. 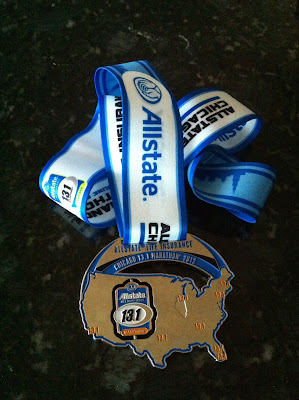 The race took place on the city's south side in an area with limited parking and select public transit options.  Therefore, the race had free shuttle busses departing from a few pickup points throughout the city.  I had every intention of taking a 5:30 AM shuttle bus from downtown.  But, BIG HUGE thanks go out to Adam, who volunteered to drive me there and did so very cheerfully.  I felt so, so bad waking him up at 5:55 AM on a Saturday morning and if the roles had been reversed I would have been much grumpier.  (Actually, even without reversing the roles I was still much grumpier than he was.  He's an amazing person.)

Things got a little frenetic as we approached.  Cars and busses were packed, and police were redirecting folks in different directions.  We had to detour through some side streets and wind our way back.  A bunch of running bloggers were meeting at gear check for a photo at 6:30 AM, so I rushed in with the hopes of still making the photo.  I was met by an enormous gaggle of runners.  This is what it felt like:

After walking back and forth a few times and pushing my way through the crowds like an NFL running back, I still hadn't found gear check and it was well after 6:30.  I gave up and was disappointed that I missed the photo meetup, but dutifully got in line for the portapotties.  I was still in line when they blew the starting airhorn.  Thankfully I was in a later starting corral so I didn't actually start until about 25 minutes later.

I tried to start out slowly.  I was still nervous about the left hip pain I'd been experiencing earlier in the week, and unfortunately my hip was stinging me here and there.  Every time it did I winced to myself, and started counting how many miles I had left (which is not a good thing to do when you're at, say, mile 1.3).  While the occasional stinging was uncomfortable, thankfully it wasn't debilitating.

The course afforded gorgeous views of the Chicago lakefront and skyline, and wound through some beautiful parks.


I was focused more on hugging the corners of the path and on my hip pain to enjoy the scenery as much as I would have liked to.  But I am enjoying seeing the pictures that other runners posted from the race.  =)

There were plenty of water/Gatorade stations, some fun live performers (men in kilts! taiko drummers! color guards with flags!) and deejays along the course, plus several misting stations.  They also provided some cold towels and ice chips.  The race was very well prepared for runners dealing with the heat, and for that I was very grateful.  I never felt like the heat was overwhelming.  Also, the volunteers on the course were amazing - such great enthusiasm.

Same as my last half marathon, my longest training run prior to this half marathon was an 11-miler done two weekends prior.  However, once again fatigue started to set in around mile 8.  I was disconcerted and for the zillionth time calculated how many miles I had left to go.  I started visualizing the 5K loop that I run at home, and using that to keep things in perspective (e.g. "Less than two of my 5K loops to go!")


Throughout most of the race, the 2:30 pacer was nearby.  I kept using the pacer as my "leapfrog" guide.  I was somewhat fascinated by the large crowd that initially started with the 2:30 pacer, which dwindled down further and further as the race progressed.  (The 2:30 pacer ended up crossing the finish line by herself, which I hear is actually somewhat typical?)

Using the Jeff Galloway method, I had been taking periodic walk breaks throughout the course but once I hit mile 9 I tried to take as few walk breaks as possible.  It was tough.  Mile 11 felt like it would never end and mentally, it was the longest mile of the entire course for me by far.  We were along a stretch of the lakefront where the path curved so you could see the runners very far ahead on the course - and they looked tiny and so far away.  Not wanting to get discouraged again, I tried to avert my gaze so that I was only focused on what was directly ahead of me.

I saw Adam around mile 12.9, and started feeling relieved that the finish line was close.  I did pick up the pace a little bit in those last few minutes but I didn't even attempt to sprint across the finish line.

Prior to the race I had been looking forward to eating the Lou Malnati's pizza they were serving at the finish line.  But after crossing the finish line I actually had no desire to eat pizza - which is incomprehensible for me (although, I made up for it later that night at dinner).


I got some water and a banana, and Adam and I found a shaded patch of grass to sit.  (There was another photo meetup after the race, but due to my later starting corral and fatigue, I ended up missing the second photo, too.  Grrrrr.)

While we were sitting, some people nearby started shouting, "Medic!  Medic!"  We watched as one of the medic carts zoomed by.  I lamented to Adam about how it must be so nervewracking to work as a medic for these races, and that I'd heard horror stories about working the medical tents at marathon finish lines.  I was also lamenting to Adam that the half marathon distance was challenging enough, that I couldn't possibly imagine doubling this distance, and what the heck had I gotten myself into in signing up for a full marathon (this is the edited version, I actually used much more colorful words).

After getting home, though, and having some time to recover, I started getting excited about my next half marathon (the Rock N Roll Chicago on July 22).  Only six weeks away until the next one!  =D
﻿ ﻿
Posted by emmers712 at 9:39 AM