Close encounters of the bird kind

With all of the uneasiness and sadness engulfing the running community and beyond after the Boston Marathon explosions this past Monday, today I thought I'd share something on the lighter side.  (Thanks to both Erin and Adam for their input on the title of this post.)

When Adam and I went to the Blackhawks game at the United Center this past Monday, we got a little bit more than just the viewing of a great hockey game.  We also interacted with a prominent member of the Hawks' auxiliary staff!


Let me back up a bit to divulge some history.  A couple of years ago, Adam and I were at another Blackhawks game at the UC, this one between the Penguins and the Hawks.  (You can read his full recap of the game here.)

To put things into context, the Pens are the only team that Adam will root for above the Hawks, and the Hawks are the only team that I will root for above the Pens.  As such, I was wearing my Hawks jersey and Adam was wearing his Penguins jersey.  Suddenly, Tommy Hawk came by and sat on my lap for a few minutes to take a picture with a kid that was sitting next to me.  Adam wasn't thrilled with Tommy Hawk sitting on my lap to begin with.  But, as Adam describes it, Tommy Hawk stared at him and his jersey before he did it, "clearly mocking the superior fowl."

"For a moment I ponder going Brent Johnson on him and throwing a right cross to the beak. I mean what’s my worst case scenario for premeditated avian assault? Five for fighting and a four day suspension?"

Ever since that incident, Adam has not been eager to brush with Tommy Hawk again.  End of story.

Or so we thought. 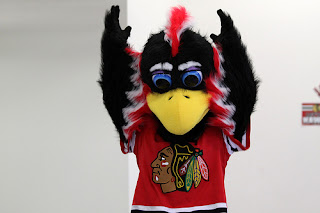 Fast forward to this past Monday night.  We were in our seats enjoying the game.  All of a sudden, Tommy Hawk came by out of nowhere to give a birthday greeting to a woman sitting right behind us.  He whipped out a giant can of silly string and began spraying her into oblivion.

While doing this, Tommy Hawk noticed that Adam and I were enjoying his antics (OK, maybe more so me than Adam).  Not to be outdone, Tommy Hawk turned and at point-blank range he barraged Adam with an enormous plume of silly string.  He then proceeded to vigorously rub Adam's head with his wing.

It's a good thing that there are smartphones around to take pictures in the heat of these types of moments.  Check out this action shot! 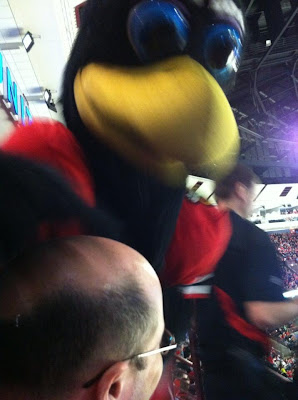 As you might imagine, Adam was resigned after his second encounter with Tommy Hawk.

Shortly thereafter and thanks to the magic of Twitter, I soon received this notification: 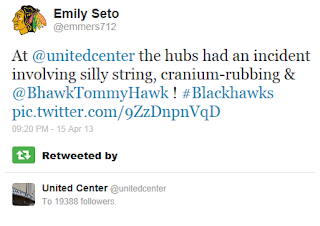 That's right, ladies and gentlemen.  The United Center retweeted my picture to over 19,300 followers. 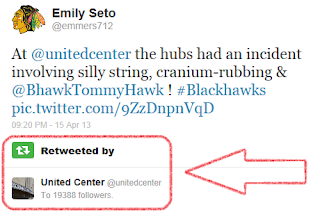 I know that Adam is thrilled to receive such publicity!  How could he not be!?