The state of my life can be summed up with one great picture: 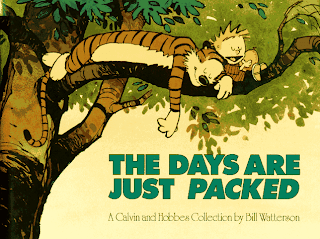 (I used to love Calvin and Hobbes!  But more on that another time.)

On an unhappy note, I've been fighting a cold since last Thursday.  I have a stuffy nose and a scratchy throat and I just feel lethargic and blugh.  This cold came just in time for me to travel to Maryland this past weekend for my stepmother-in-law's 80th birthday party, too.  The festivities were really fun, but sadly I was dragging Kleenex wads around and choking down Alka Seltzer all weekend.

I had packed my running gear with me with full intentions of doing two runs in Maryland.  Instead, I managed to only get out once on Saturday morning for three of the most craptastic miles I've ever done in my running life.  I've heard that if you have a cold that is limited to the neck or above, that you can still run.  But after this experience I'm not sure I'm ever going to try running with a cold ever again.  It is not fun to run when you can't breathe through your nose and the air hurts going through your throat. 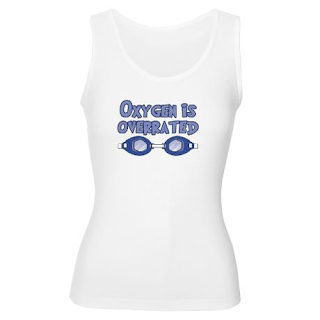 On a different note, both positive and not positive, I found out yesterday that the Rock N Roll Pittsburgh Half Marathon has been cancelled for 2013. 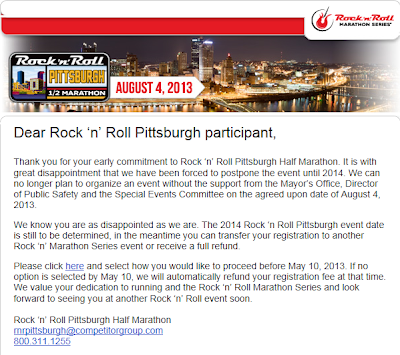 I was disappointed because I was looking forward to this race, especially having had a great experience at the Rock N Roll Chicago last year.  However, I actually had been concerned about the timing of Rock N Roll Pittsburgh in August.  It was scheduled to take place just two weeks after this year's Rock N Roll Chicago, as well as the weekend prior to the 2013 NAAAP National Convention in Toronto.  So from a timing standpoint, maybe it's just as well.  Next year, though, watch out!

BUT!  When one door closes, another door definitely opens.  The Canada Running Series will be hosting the Toronto 10-Miler the same weekend that I'll be in Toronto for the NAAAP convention.  Now that I no longer have Rock N Roll Pittsburgh on tap, I would love to run a race in Toronto!  The only thing is that the convention weekend is always super busy, and I may be biting off more than I can chew by trying to add a race to the weekend's plans.  So I have to consider if I should be realistic about my body's capabilities that weekend, or if I should tell myself that I only live once and shoot for the moon.  What to do?  What to do? 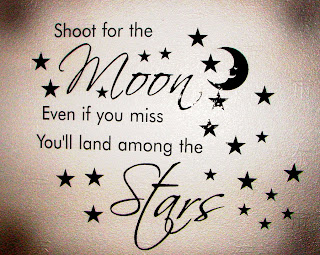 Speaking of favorite Canadian pastimes, the 2013 NHL playoffs start tomorrow night!  Taking a page from Adam's book, I am going to share with you my heavily biased predictions for the first round matchups.  I am certainly no NHL hockey expert, but it's still fun to spin the brackets!

#1 Chicago Blackhawks versus #8 Minnesota Wild
Yes, I am a rabid Hawks fan.  But the Hawks dominate every category of this matchup (offense, defense, goaltending, special teams, coaching, intangibles).  The Wild also saw themselves in a precarious decline towards the end of the regular season, just barely making the playoffs.  Sure, the Wild have a lot of newly acquired talent this year in Zach Parise and company, and I know that first-round matchups can be a doozy.  But with all due respect to Wild fans, I am obscenely biased and I don't think it's going to happen for Minnesota.

#2 Anaheim Ducks versus #7 Detroit Red Wings
Nobody talked much about the Ducks and their amazing regular season this year (it got overshadowed by the Hawks).  I don't know a whole lot about the Ducks, but coach Bruce Boudreau unfortunately has a history of his other teams flaming out in the playoffs.  Even though Hawks fans embue the vicious rivalry against Detroit, I do have a lot of respect for the Red Wings and their amazing 22-year playoff streak.  The Wings have great playoff experience, leadership, and coaching.  Despite being without Nicklas Lidstrom and having some injury issues, I think they have the potential to make this an upset.

#3 Vancouver Canucks versus #6 San Jose Sharks
Once again being the rabid Hawks fan that I am, I do not root for Vancouver, given the bloody rivalry between the two teams.  This is also not to mention that the Sharks have my all-time favorite goalie of all time, former Blackhawks goalie Antti Niemi.  But in all seriousness, I think the goaltending controversy in Vancouver is going to leave its mark.  I don't think Cory Schneider will be able to get it done in the end amidst the mounting pressure in Vancouver.  While the Sedins and Ryan Kesler have great talent, I believe that the Sharks will squeeze this one out in the end.

#4 St. Louis Blues versus #5 Los Angeles Kings
This is going to be a very interesting matchup.  Everything comes back to being a Hawks fan for me, of course, and I don't like the Blues.  Not just because they are a division rival to the Hawks, but also because of their antagonistic, grinding, brutally physical style of play.  However, the Kings are a very physical team, too, so this series is going to be like cannibals pulling each others' kidneys!  The Kings have had their ups and downs with goalie Jonathan Quick, and the Blues have had their share of injury problems with goalie Jaroslav Halak and others.  But in the end, I think that the Kings are a little bit more deft offensively.

#1 Pittsburgh Penguins versus #8 New York Islanders
My second favorite team in the NHL is the Penguins, thanks to Adam's influence, so I am not unbiased when it comes to the Penguins.  When they are healthy, the Penguins are a scarily talented and dangerous team (one that I hope for the sake of my marriage does not end up meeting the Hawks in the Stanley Cup Finals - but that's a story for another day).  The injury to Sidney Crosby, as well as the recent injuries to James Neal, Paul Martin, Kris Letang, and Brooks Orpik (among others) do scare me.  But even with the injuries, I think that the Penguins are much more talented than the Islanders in pretty much all categories.  Kudos to the Islanders for breaking their nonplayoff streak, though, and it'll be interesting to see Evgeni Nabakov's performance in goal.

#2 Montreal Canadiens versus #7 Ottawa Senators
This is a tough one.  After a fiery start, I was surprised to see the Canadiens slump in the later weeks of the regular season.  I was also surprised to see how well the Senators fared all season despite massive injuries to very key players like Erik Karlsson and Craig Anderson.  All in all, this one is a wildcard for me.  But I think the Canadiens will eek this one out in the end.

#3 Washington Capitals versus #6 New York Rangers
Another tough one.  The resurgence of the Capitals during the latter half of the regular season was nothing short of astounding.  From everything I heard, Alex Ovechkin found his jump out of nowhere and looked more like his old self than he ever did in recent years.  Alas, I don't think that the Caps will be able to keep up their hot streak throughout the playoffs - especially against a physical team like the Rangers with solid goaltending from Henrik Lundqvist.

#4 Boston Bruins versus #5 Toronto Maple Leafs
I don't know a whole lot about the Maple Leafs, but on paper I think Boston is the second-most dangerous team in the Eastern Conference behind the Penguins.  However, it was surprising to see Boston losing their competitive edge towards the end of the year, which is never a good sign.  Toronto also appeared to be trending downwards towards the end of the regular season, too.  In the end, I think that Boston will pull this one out.

--
If there are any other NHL fans out there, I would love to hear your thoughts!

In the meantime, it is only appropriate that I close here with a picture of one of the Blackhawks' oldest and biggest fans - brachiosaurus Sue from the Field Museum of Natural History, donning her Jonathan Toews jersey. 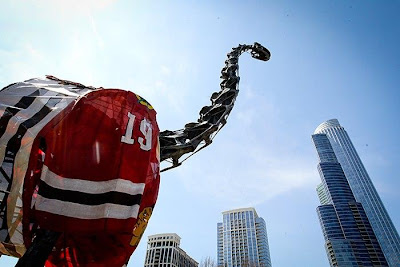