Yesterday I ran the Carrera de los Muertos 5K for the first time.

This race is in honor of Dia de los Muertos ("Day of the Dead"), which is a Mexican holiday observed to remember friends and family that have died. The race takes place in Chicago's Pilsen neighborhood, which is a traditionally Mexican-American neighborhood to which I live nearby.

I had only recently heard about this race, but those that had run it before had absolutely RAVED over it. I have actually been starting to get into a little bit of a race rut, so I was looking forward to something different from the usual. WOW, did this race ever deliver! It was pretty much one giant party from start to finish. 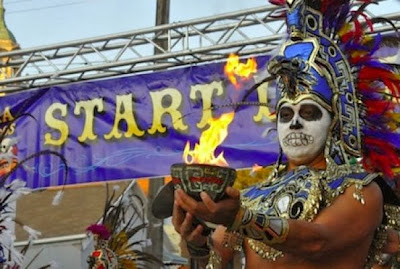 I pulled myself out of bed before sunrise to get dressed and eat breakfast, then left in the darkness to catch a CTA pink line train down to 18th Street. As per usual with early-morning races, especially those that involve leaving in cold and darkness, I was wondering why I do these types of events "for fun."

Then I arrived at the race start to see the sun rising, big crowds of excited runners (many in costume), and the cheerful sounds of a mariachi band. I immediately perked up. 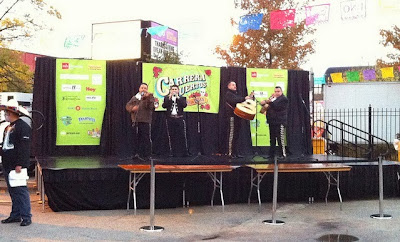 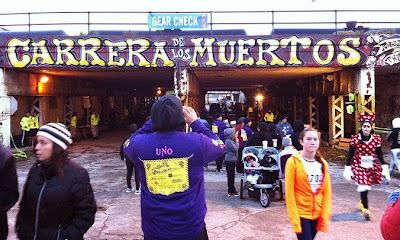 Packet pickup was a breeze, and there was no line for the portapotties. Excellent!

I wandered around for a bit observing some of the costumes: 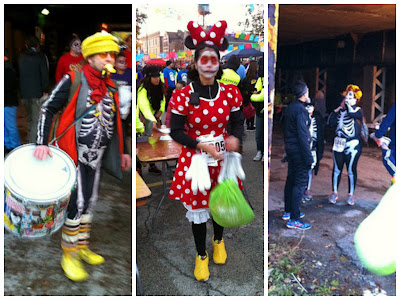 This Blackhawks fan (aka yours truly) happened to notice some other great outfits being worn: 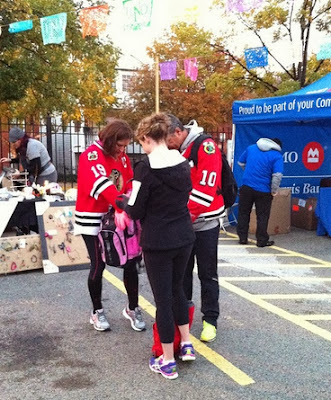 We also had a variety of beings keeping us company:


I saw Amanda. Unfortunately I didn't get a picture with her because she was scurrying to move her car from a nearby area amidst the announcement of tow-warnings over the public address system. Amanda, I hope you got there in time!

I went to check my bag at gear check. It was one of the more unusual gear check set-ups that I've ever seen:


After I checked my bag, I ran into Maggie and her husband, who were both running the race.


By the way - check out the cool personalized bibs, e.g. "La Maggie" and "La Emily." Male names, for example, would say "El Fabio." So funny!

I went to make a second stop at the portapotties and to try to warm up. A portapotty line had built up by this time, so afterwards I only had about ten minutes before the race starting time. Many of the surrounding streets were packed with people and/or were being blocked off to traffic due to the race. Therefore, there weren't a lot of places to warm up. I improvised by just running back and forth on a one-block stretch behind where all of the runners were lining up.


While I was warming up, I never heard a starting airhorn or similar for the race. But, I saw that the crowd was starting to inch forward. There had been pace signs set up for runners to line up accordingly. However, since the runners were moving, the pace areas were no longer clear. I just ran up to somewhere in the middle of the pack and wiggled sideways into any opening I could find.

It was very, very crowded. There were also lots of walkers, some of whom were walking five or more abreast. It made it very difficult to get my pace up. I didn't want to go overboard weaving through, but it was so crowded that I ended up having to slow down to a walk several times.

I thought that I had started the timer on my Garmin when I crossed the starting line. But somewhere during the first mile, I looked down and realized that it hadn't started. Oops. Not a big deal since this race was by no means intended to be a PR attempt or goal race. But, it still would have been nice to see my splits. Oh well.

In the meantime, I felt like I was moving along with a traveling party! The crowd was very energetic and there was lots of music and other course entertainment. In a flashback to my college years, I heard this song at least twice throughout the course of the event:


Plenty of folks of all ages stopped to dance along the way!

The crowd finally started thinning out a little bit after the halfway point, so I tried to pick up my pace a little bit. The course ran through parts of Pilsen and University Village. Even though I run through both neighborhoods all the time, the course did cover some streets that I'd never seen before. That was cool. I am excited to go back and run some of those streets again later in training.

According to the official race results, I ended up crossing the finish line in 28:57. Not too bad, especially considering how crowded it was for the first half of the race.

Almost all races that I've been to have served the run-of-the-mill water, bananas, and bagels to the runners at the finish line. Not this one. 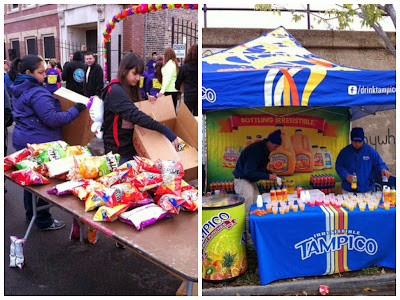 They were even handing out freshly-made churros! What a nice treat after a race. I wish I had gotten a picture.

Then, on to the post-race party. It was a big street festival! 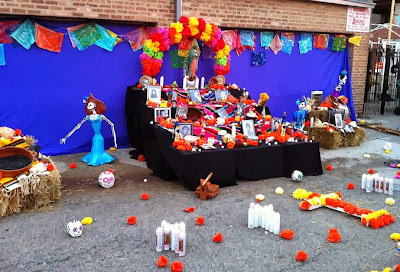 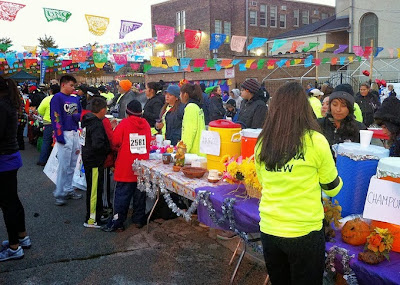 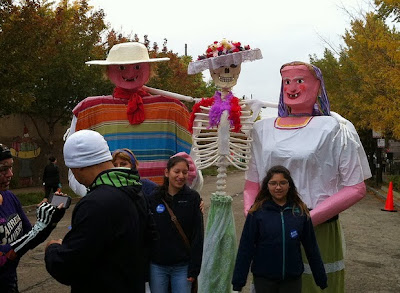 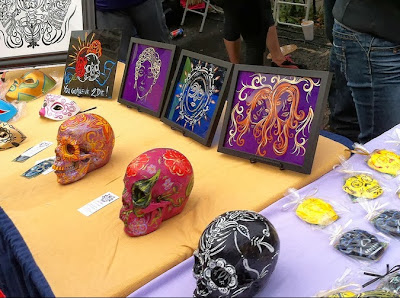 I always say that the way to get to know any travel destination is not just in its tourist hotspots, but more so in interacting with locals in their residential neighborhoods. Therefore, it was so much fun to run a race while simultaneously getting to absorb some of Pilsen's energy and festivity. It is motivating me now to seek out more of the other local neighborhood races held throughout the city - especially in the more ethnic communities.

One last thing. The Carrera de los Muertos is highly regarded for its race shirt. The shirt is so popular that the race organizers keep a tally of the locations where the race shirt has traveled.

Here is this year's shirt. (I was trying to show the sleeve detail so please disregard the awkward asymmetrical way that I ended up displaying it for the picture.) 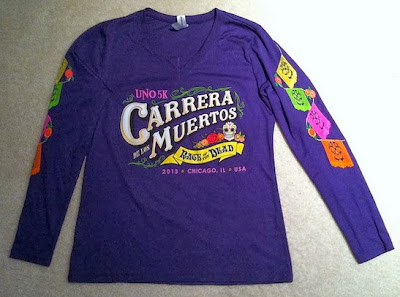 The verdict? Love love LOVE! In my opinion, the race shirt alone was worth the race registration fee. It is easily my favorite shirt ever out of all the race shirts I have ever received.

Normally I only wear my race shirts when I am working out. But, I would wear this particular shirt all the time to travel, hang out with friends, go out for a casual meal, etc. Case in point - I happily wore the shirt to a Toastmasters meeting yesterday morning after the race, and I received several compliments on the shirt. =)

This race was a blast! I thoroughly enjoyed all of the festivities and I look forward to doing it again next year!

My next race: the Disney Wine and Dine Half Marathon on November 9
Posted by emmers712 at 11:41 AM