I have a LOT to share about my Disney Wine and Dine Half Marathon experience. Therefore, I am going to break up my recap into a couple of more-manageable posts. (In case you missed it, here is my post about the race expo.) Today I'll talk about my history leading up to the race, some of the race-day logistics, and the starting village.

My history leading up to this race
When I first heard about the Disney Wine and Dine Half Marathon during its inaugural year in 2010, I immediately added it to my "must do someday" list. I love Disney, travel, food, and running; and this race covers all four! How could I not get excited about an event like this?

After a few years, the opportunity finally came up to attend this year. However, in the months leading up to the race, I actually kind of lost track of the personal magnitude of this event for me. I signed up for so many other races this year, started a new career that required a lot of focus, and have been doing more and more non-running workouts. I did an obligatory 11-mile training run two weeks prior to this weekend; otherwise, this weekend really snuck up on me. Therefore, I didn't spend too much time thinking about how to handle some of this race's unique challenges. Namely...

Race Day Timing and Considerations
The Wine and Dine Half began at 10:00 PM, with the later corrals starting as late as approximately 10:40 PM. (Note that I said PM, not AM.) Then, the post-race party took place at Epcot and took place from 10:00 PM to 4:00 AM. Basically, the race's festivities took place during the exact opposite of what you would expect from an AM/PM perspective.

Post-race party admission was included for all runners, and spectators that wanted to attend the party had to purchase a separate ticket. Spectators were allowed admission into Epcot starting at 10:00 PM with free parking.

Going into the race, I was concerned about the late-night event timing. I wouldn't call myself an early-bird, but I am definitely one who turns into a pumpkin/zombie by the time midnight rolls around.


I was in a corral which would be kicking off at 10:12 PM, so I knew that I would be finishing the race somewhere around 12:45 AM. YIKES! I had been assured that adrenaline and the excitement of the race would keep me going, but I was still nervous.

Having to wait the entire day to run the race didn't help calm my nerves. I am very used to running early-morning half marathons. For every half marathon I've ever done, basically I just got up at some ungodly hour, threw on my running clothes, ate breakfast, and headed out the door before I even had time to think too much about anything. Most of the race-day prep is done the night or the days before the race.

Comparatively, for this race, I had literally ALL DAY to think about the race. I spent the entire day wondering if I was fueling/hydrating properly, hoping that I wasn't on my feet too much, considering what activity might be enough/too much, worrying about whether or not I had trained adequately, analyzing every injury-related twinge of discomfort that I felt. I went to take a nap around 3:30 PM, but my mind was racing so much that I had trouble falling asleep. It was pretty nerve-wracking. 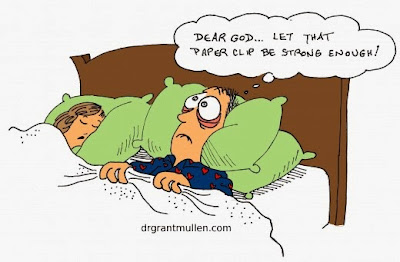 The race guide advised us to eat around 6 PM, and to have a snack approximately an hour before our starting time. I was hungry by 5:30 so I stuffed myself with some pasta. Then I wondered if that half hour would make a difference, so for good measure I ate some more pasta at about 6:15. I packed a granola bar and a Clif Bar sample for my pre-race snack.

All runners had to get dropped off at Epcot, where we were to board shuttle buses to the race's starting line at the ESPN Wide World of Sports complex. The shuttle buses began running at 7 PM and we were asked to be on the buses no later than 8 PM. At the race expo, I had been instructed to get dropped off for the race shuttles closer to 6 PM because of potentially long lines. However, since I wasn't going to be starting until 10:12, I made the executive decision to arrive closer to 7:20. Enroute, I was as nervous as I had ever been to run a half marathon.

The line to get onto the shuttle buses was indeed long and this picture doesn't even begin to do it justice: 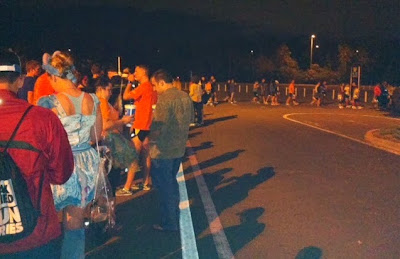 Thankfully the line moved quickly and I was on a bus in less than 10 minutes. I sat next to a very nice woman who was running Wine and Dine for the fourth time in a row. She shared stories of how amazing and fun the race was, and that helped calm me down a little bit.

Starting Village
Once the buses dropped us off at ESPN, I went through security bag check and then entered the start village. It was filled with runners in costumes, spectators, people stretched out on the grass, Disney cast members, race officials, photographers. 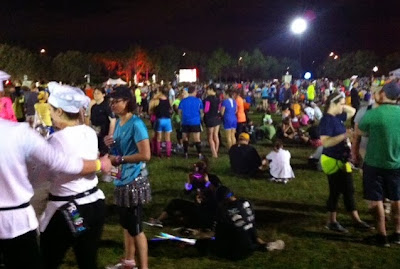 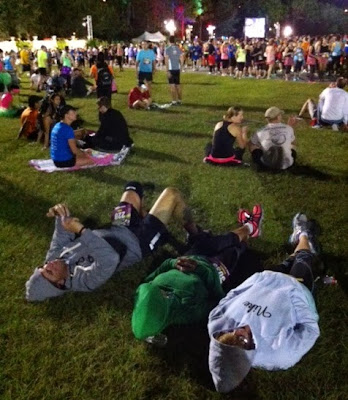 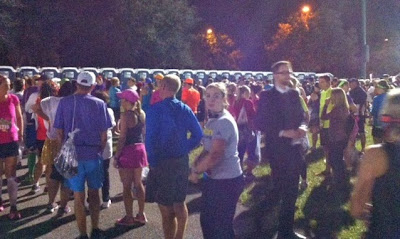 I waited in the long line for the portapotties, then checked my gear bag. Afterwards, I still had almost two hours before I was scheduled to begin the race. I wasn't sure how I was going to fill the time.

I wandered around for a bit. There were several Disney characters available for photos, but the lines to do so were very, very long.


A giant TV screen was set up in one area broadcasting a deejay who was rocking out a big dance party (unfortunately I didn't get a picture). In an effort to preserve my energy, I opted not to join the masses of dancing runners. Instead, I got some water and found the entrance to my corral.

The corrals weren't open yet, so I found a spot on some asphalt to sit down. Unfortunately I didn't bring a blanket, and some gravel ended up sticking to my legs where I had applied BodyGlide. I brushed the gravel off, worrying that I had also brushed off the BodyGlide and might end up with some chafage before all was said and done.

While waiting, I observed the runners and costumes around me, semi-eavesdropped on conversations taking place nearby, listened to the deejay entertaining the crowd, and used my phone to read blogs and surf the internet. Eventually, the corrals opened. I entered and found another place to sit down and do more of the same.


There was a different deejay working the start-line area. In between playing music and sharing jokes and last-minute tips and instructions, he went through the crowd jovially interviewing runners. He talked to several folks who were first-timers to the half-marathon distance and/or had not done a lot of training. This included one man who cheerfully said that the longest distance he'd ever run in his life was 8 miles (which reminded me of myself during my first half-marathon experience.) It demonstrated how much this race is more so about people just enjoying the Disney experience and having fun, as opposed to being competitive and trying to nail a PR. He also talked to folks who had traveled from all across the U.S., Canada, and other international locations to participate.

Jeff Galloway is a runDisney training consultant and he spoke to the crowd for a few minutes prior to the start. He was running the race himself, and I think he said he was planning to utilize the race as a Boston qualifier. I was too far away to see him speaking. However, I use a lot of his training advice, so it was cool to hear him.


After a stirring rendition of the national anthem, the race started right on time with a display of fireworks. I thought that they would shoot off fireworks only for the initial race start, so I was pleasantly surprised that they shot off fireworks to release every starting corral. Closer to the start line, they were also blowing off a huge cloud of bubbles, too. It was so festive!


At 10:12 PM on the dot, my corral was off. The corrals were nicely spaced out so it was not at all crowded. We were buoyed by a large crowd of enthusiastic spectators, including lots of Disney cast members, race officials, and volunteers also cheering us on. As per usual at large races, it was hard not to get swept away in the excitement.