Continuing from here. (Get ready for a gazillion pictures in this part of the recap!)

The course departed from ESPN and started out along the roadways in between the parks. Our first theme park destination was the Animal Kingdom around mile 3.5, but I knew that there would be plenty of entertainment along the way. I decided to keep my phone out and run with it in my hand the whole time so that I would be immediately ready for any picture opportunities.

At the start, there were several deejays spaced out along the course playing a great selection of music with lots of neon lights. Here is one of the deejay vans: 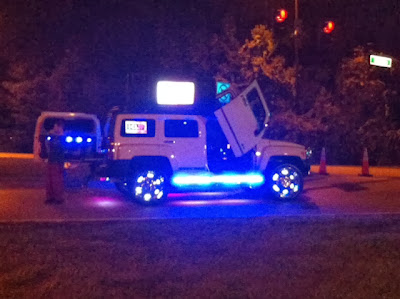 Then, I saw the first of many Disney characters along the course that were available for photos. Each set of characters had official race photographers to take pictures. Additionally, a cast member was available to use your personal camera to take your picture if you liked. 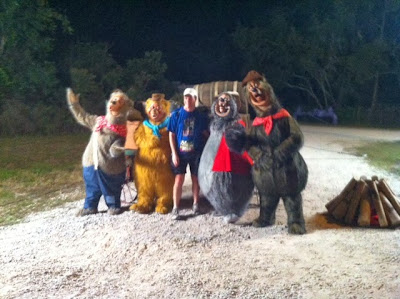 We came across a giant TV screen broadcasting a variety of Disney cartoons (unfortunately the TV didn't photograph well in the darkness): 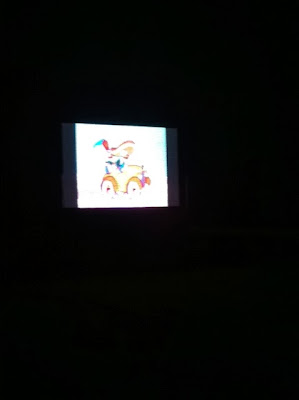 There were aid stations approximately every 1.5 miles with plenty of enthusiastic volunteers handing out water and Powerade. There were also portapotties available at every aid station.

Here is something I've never seen before at a race. Each of the portapotties had big numbers on them, and volunteers were stationed nearby with flashlights. The volunteers helped direct runners to any open portapotties by number. That was very well-appreciated. What great customer service!

Check out the awesome mile markers - each one had a different travel destination pictured on it: 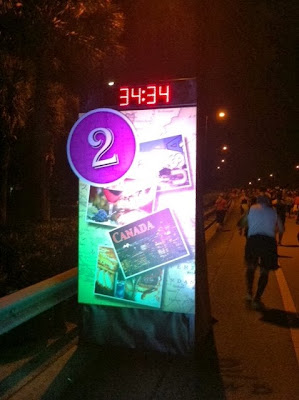 Then I came upon the next set of characters available for photos: 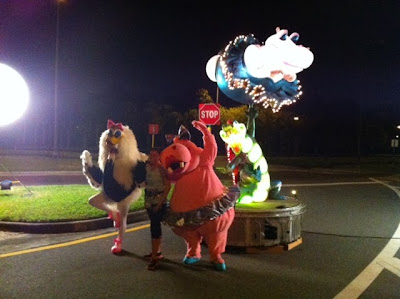 Many of the volunteers along the course were wearing Mickey Mouse gloves and giving high fives and course directions with those gloves. It was cute and they were very informative, e.g. "Watch out for the speed bump coming up ahead!" or "There's a sharp right turn coming up!"

The miles flew by and I arrived at the Animal Kingdom. It was such a surreal experience running through the park at night. All the lights and decorations were on, but other than the runners and the course marshalls, it was completely empty. Quite a change from the usual mobs of park-goers that I am used to seeing!

Here are some pictures from the Animal Kingdom:


I saw at least six different sets of characters available for photos around the Animal Kingdom: 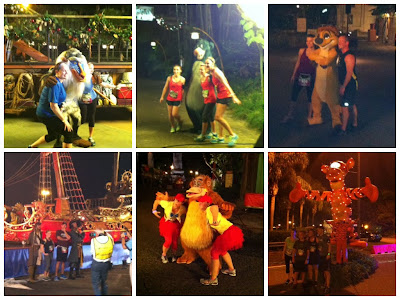 We didn't get to see any of the animals, given that it was nighttime and they were probably all sleeping. However, I loved seeing the gorgeous African-inspired backdrops and scenery along the course.

The course exited the Animal Kingdom around mile 4.5. Next stop: Disney's Hollywood Studios near mile 9.5.

Somewhere around mile 6.5, another giant TV screen was set up. This one was broadcasting footage of various spectators from the post-race party back at Epcot. The spectators being filmed were saying things like:


"Can't wait to see you back at the finish line!"
"We've got a big celebration waiting for you when you get here!"
"We are so proud of you! Keep it up!"

It was so uplifting. I loved it.

At the mile 8.4 aid station, volunteers handed out Clif Shots in an assortment of flavors.

Near the 9-mile marker, there was someone from one of the U.S. military units taking pictures with runners. Someone (not sure if it was the military person or another person I didn't see) broadcasted humorous remarks over a loudspeaker while playing Yankee Doodle Dandee. I remember one thing in particular that he said, which was:

"Runners, after you have finished this race, you have earned the right to indulge yourself. When you get home, it'll be time to have some deep-fried Cocoa Puffs with rainbow sprinkles covered in Alfredo sauce!"

I literally laughed out loud.

There were more deejays along the course playing different varieties of music. I started hearing the twang of Elvis Presley. My ears perked up, as I knew this might mean a photo opportunity with one of my very favorite Disney characters - Stitch!!! Sure enough, there he was with Lilo! I immediately got in line to have my own picture taken with them.

This was actually the only character photo I chose to take of myself along the entire course. I immediately texted it to Adam, who was waiting for me at the post-race party. This photo was too key not to share immediately. (Adam told me later that when he first saw my text come through, he got nervous since I'd never texted him while in the midst of a race. But then when he saw the photo, he understood its magnitude. =D )

I got back on course. The mileage continued to fly by. All of a sudden, the course made a turn, heading through one of the back entrances to Disney's Hollywood Studios with the Tower of Terror arising in the background.


Running through the Osborne Family Spectacle of Dancing Lights was an especially magical experience. I haven't started getting into the holiday spirit just yet, but seeing those beautiful lights put an enormous smile on my face. There were many, many other runners stopped during that portion of the course to take pictures.

There were at least four different character photo stops at Hollywood Studios: 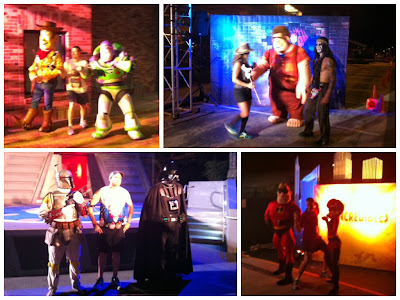 The music was also really great at Hollywood Studios, since it was all movie-based. I remember hearing the themes to Rocky and to Star Wars, among many others. What a great way to keep all the runners pumped up!

We exited Hollywood Studios close to Mile 11. Next on the course: running through Disney's Boardwalk during miles 11 and 12, then entering Epcot around mile 12.5 to head to the finish line.

Normally miles 10 or 11 are where I start breaking down both mentally and physically. However, this evening I was so fired up and exhilarated from all the sights and sounds that I barely felt the mileage at all. I seriously couldn't believe how quickly the miles had flown by.

I only took one picture along the Boardwalk: 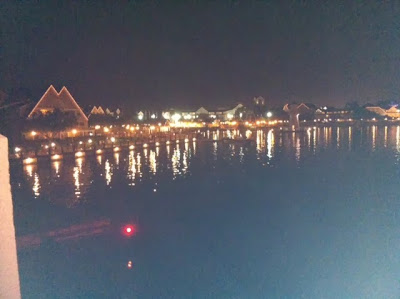 However, since we were now running past several of the Disney resorts, there were a growing number of spectators camped out along the course. They had lots of signs and were giving us high-fives while cheering everyone on. I enjoyed seeing the diversity of college- and professional sports-team gear that I saw amongst the spectators. Truly the spectators represented travelers from all over North America.

After entering Epcot around mile 12.5, I finally reached the point where I was ready to cross the finish line. I stopped to take these few photos within Epcot, then tried to complete the remainder of the course without stopping.


There were so many spectators along the final stretch at Epcot. It was awesome!

We went through a big curve underneath some colorful spotlights. (In my rush to finish, I didn't stop to photograph the spotlights, but now wish that I had since it was really cool.) There was the finish line!

My finishing time was pretty much irrelevant for this race, given all the photo stops and other pauses I had taken, etc. However, my official time was 2:35:21.

There were volunteers stationed past the finish line handing out the medals (here is a picture of the medal), bananas, bottles of water and Powerade, and individual boxes of food that held quinoa chips, hummus, graham crackers, Clif bar sample, fruit puree, almond pops, and a moist towelette. Excellent.

I retrieved my bag from gear check. Gender-specific tents were provided for runners to change their clothing, if they desired, prior to attending the post-race party. It was crowded inside but I found an open patch and changed as quickly as possible into a warmer set of clothing.

Back outside, I followed the crowd towards the race exit. I skipped the beer line, but volunteers and cast members were handing out individually-sealed glasses of either white or red wine so I took a red wine. Then, time to re-enter Epcot for the post-race party!


Adam and I had picked a hierarchy of three post-race meet-up spots. However, given the crowds and the distances involved, we ended up just coordinating our reunite location via cell phone communication.

We checked out a couple of the rides that were open for the post-race party (Spaceship Earth and Soarin'). There were almost no lines for any of the rides or activities, which was nice.

Unfortunately, at Soarin', we saw one runner exit the ride and then nearly collapse along the wall. Another runner apparently passed out while on the ride. The cast members halted operations for a few minutes while they contacted medical personnel for assistance. (I have to imagine that the cast members that work the Wine and Dine post-race party are accustomed to seeing a higher-than-usual number of health incidents due to runner exertion.)

After Soarin', we went to the World Showcase. In conjunction with the International Food and Wine Festival, there was a wide variety of booths offering tapas-sized food and beverage tastings from all over the world (above and beyond the usual countries represented at the World Showcase). It was packed.


By this point, it was after 3 AM. Adam was fading rapidly due to the late hour. My race adrenaline was also starting to dissipate and I was starting to get tired as well. At that point, we called it a night; however, the party was still going VERY strong when we departed!

The next day was definitely a bit rough with the whole self-induced jetlag factor, LOL. But it was well worth it!

In summary...
The Disney Wine and Dine Half Marathon was an incredibly magical and exhilarating experience that was unparalleled in so many different ways. I loved the energy, the entertainment, the camaraderie, the music, the lights, the attention to all the little details, everything. If time and resources permitted, I would run this and any other Disney race again in a heartbeat!!!

When can I come back for my next Disney race!?!?!? 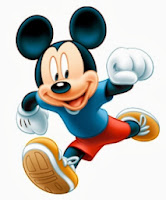