It is only early November, but I've already started some major scheming on the races I want to do in 2014. Here is what I've got on the list.

I've said many times that animal shelters are a cause that is very, very special to me. The PAWS Run for Their Lives 8K and the Petco 5K9 are huge favorites of mine for this reason. I am pretty much just waiting for the race organizers to announce the dates for 2014 so I can mark them in my calendar.

In addition to both of these races, I have also heard that the Anti-Cruelty Society hosts a 5K race called Bark in the Park where the proceeds go towards their cause. It sounds like it is a similar format to both the PAWS and Petco races whereby runners are allowed to participate both with and without their pets. 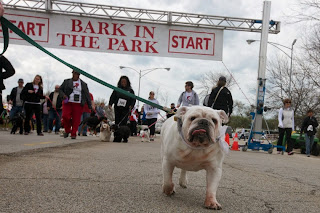 Unfortunately when I heard about Bark in the Park for 2013, I wasn't able to participate since it conflicted with the Wisconsin Half Marathon. I'll be keeping an eye on this race's date for 2014 in hopes of attending.

Blackhawks Fandom
Yours truly, the rabid Blackhawks fan, would never want to miss the Blackhawks Mad Dash to Madison 5K. It is hosted every year in conjunction with their annual Training Camp Festival. 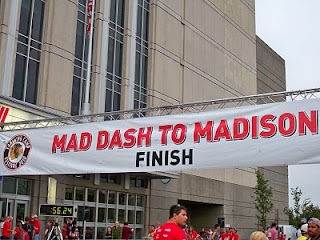 I love this event! It one of the most fan-friendly events that the Blackhawks organize. A Blackhawks-themed tech shirt, a player bobblehead, thousands of other rabid Hawks fans eager for hockey season to start, and admission into the United Center to watch a player scrimmage? When can I sign up!?!

Esprit de She
I am excited to be a race ambassador for Esprit de She for the second consecutive year!

Last year was their inaugural event in Chicago and I had a BLAST. It was like a night out on the town with almost a thousand of my closest running friends. Love, love, loved it.

I am also waiting for the organizers to announce the date for the Chicago event in 2014 so I can mark my calendar. I'll be checking out their offerings in other cities, too, in hopes that something might coincide with any travels.

Local Half Marathons
I am looking at both Illinois and Wisconsin. Both races offer both a full marathon and a half marathon option, but I would be opting for the half marathon at either/both.

Unfortunately, these two races take place on consecutive weekends. With the travel involved I don't think I can do both of them. Therefore, I will probably have to pick one or the other.

This is tough because I had a total blast at the Wisconsin Half Marathon this past year. It's got a gorgeous course, is super affordable, and is very laid-back. Plus, who doesn't love their cheese theme?

But, I am a proud alumnus of the University of Illinois at Urbana-Champaign, and I would really enjoy the opportunity to do a race on my old stomping grounds. At this very moment, Illinois has the edge because I've never run it before. Not to mention that I really enjoy adding to my medal collection - and Illinois has an I-Challenge where you earn three medals for doing two races that weekend. Very cool.

This is going to be a tough decision.


Rock N Roll Half Marathons
I am about 80% sure that I will be taking the plunge on purchasing the Rock N Roll Tour Pass 3-Pack next year. I am pretty much just waiting for the organizers to announce the date of the 2014 Rock N Roll Las Vegas Half Marathon to make sure it is doable for me. 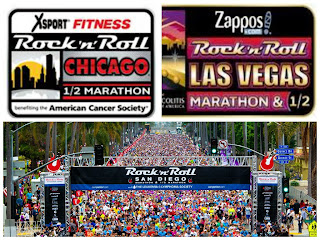 Assuming I go for it, Rock N Roll Chicago and Rock N Roll Las Vegas are gimmees. However, I am still evaluating what the third race might be. At face value, Rock N Roll San Diego is currently my top choice, but Rock N Roll Montreal is a very, very close second.

Disney Races
I want to earn my Disney Coast to Coast medal! I've seen the medals from previous years and I am dying to add one to my collection. This challenge is accomplished by running a half marathon both in Orlando and in Anaheim during the same calendar year.

If I were to go for this challenge, these would be my picks:

The biggest issue is that Disney races are mucho expensivo. You also have to consider that they require fairly significant travel costs, and ideally would also involve taking at least a little bit of time off of work. I mean, who wants to go to Disney just for the weekend, right?

To add to the complexity, some of the Disney races have started to sell out very quickly, too (I heard the Disneyland Half sold out in about 2 days this year). I wonder at what point the Disney races are going to have to go to a lottery registration system just like some of the World Marathon Majors?!?!?

At the end of the day, it's probably going to be a stretch for me to earn a Coast to Coast medal in 2014. But a dream is a wish your (runner's) heart makes...


Pittsburgh Visitation
Since I visit Adam's side of the family in Pittsburgh three or four times per year, I have many great opportunities to run races out there.

The PNC YMCA Turkey Trot is quickly becoming an annual tradition, so this is pretty much a done deal for 2014. 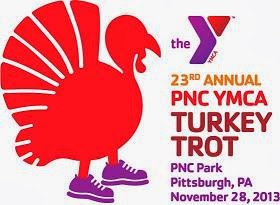 Then, I hope to do either or both the Steelers 5K and the Penguins 6.6K next year.

If I had to pick between the two, the Penguins 6.6K probably gets stronger consideration because of its unique race distance and its timing (a little bit later in the year). However, I certainly wouldn't go wrong between either race. Again, waiting for the dates to be announced for both events in 2014.

Marathoning?
I have been going back and forth and back and forth on whether or not I might be motivated enough to train for another marathon in 2014. I like the idea of running another marathon and I really, really want to improve upon my one and only marathon performance from 2012. However, admittedly I still don't really like the idea of putting forth all the difficult training time and effort.

At this exact moment, I am probably not up for the challenge. I have had enough trouble getting myself motivated to do my 10- or 11-mile training runs just to prepare for half marathons. But after I have some time over the winter to operate with reduced training intensity, maybe this will change?

In the event that I do decide to go for it, the Chicago Marathon will ALWAYS be a strong consideration. I thoroughly enjoyed the experience when I ran it. I also learned while running it that knowing the course/city and having everything take place in your own backyard is an ENORMOUS boost. So I definitely want to run Chicago again some day. It's just a question of when (assuming of course that registration doesn't become uber-competitive in the future, of which all trends indicate that it will).

Another race that I think about with stars in my eyes is the Honolulu Marathon. Aloha!!! 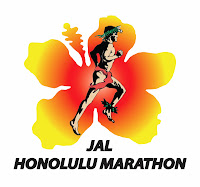 Besides the obvious draw of being in Hawaii, I love that there is no cap on registration and there is also no course time limit. Gotta love the island way of life! Unfortunately the travel costs and vacation time would be an enormous consideration for Honolulu as they can both get pretty prohibitive pretty fast.

Finally, it seems like New York is almost unquestionably the favorite marathon of anyone who has ever run it. I have to admit that I am considering entering the New York Marathon registration lottery for next year. I mean, who am I kidding - the odds of me getting into New York are probably close to zero. But we can certainly still let fate decide. You miss 100% of the shots you don't take, right?