This past Saturday, I was up before sunrise to prepare for my first-ever running of the Soldier Field 10-Miler.

This race is very popular in Chicago. It has always drawn consistently rave reviews for its stellar organization and cool finish on the 50-yard line at Soldier Field, home of the Chicago Bears. After so many years of not being able to run this race due to being out of town over Memorial Day Weekend, I was pumped to finally be able to participate this year.

Marcia picked me up just as the sun was rising (thanks again for the lift, Marcia!) We zipped down to Soldier Field (no traffic at that hour!) and took advantage of the free race-day parking. Then we headed into the stadium. I was absolutely thrilled that we were able to use the indoor bathrooms and then grab seats in the stands afterwards. I am so used to either finding a patch of grass to sit down, or having to stand the whole time before lining up at the start line. Sitting and relaxing felt so luxurious!

Here's a picture of the field from where we were sitting: 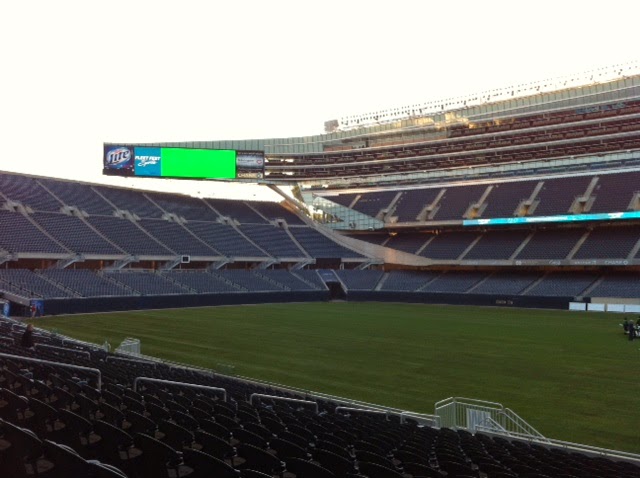 We even got to see the race organizers setting up the finish line: 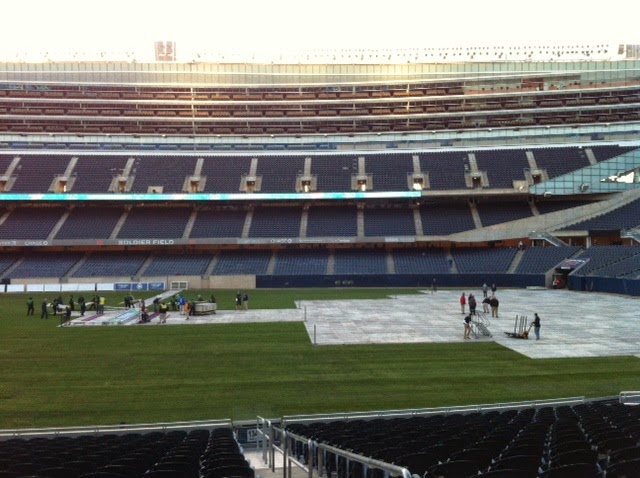 Weather conditions were excellent - temps in the upper 50s/low 60s, clear, and no wind.

Marcia and I met up with a lot of other friends running the race:


We watched the singing of the national anthem as part of the event's opening ceremony. We made another visit to the indoor restrooms, then dropped our bags at the super-efficient gear check. We then headed off to the starting corrals. It was super crowded in the corrals, but again very organized. I was grateful to have the company of Marcia, Bobbi, and Chris while waiting to start.

Unfortunately during the wait time, I began feeling the need to use the restroom again. I cursed the fact that there were no portapotties in the starting corrals. I still haven't gotten my hydration strategy down!

We crossed the starting line about 33 minutes after the official gun. The course was very crowded, which made it hard to run the tangents. I focused on staying with Marcia, Bobbi, and Chris. We went through the McCormick Place tunnel during the first mile, which I thought for sure would throw off my Garmin. When we hit the Mile 1 marker, I was surprised to see that my Garmin measured the distance almost exactly on par. Hooray!

I ran with Bobbi while Marcia and Chris began moving ahead. We saw Xaarlin spectating near the Mile 2 marker with her camera. It was so great to see her!


We saw Xaarlin again maybe another quarter mile down the course. I didn't see her run ahead of us, but it was a very welcome surprise to see her again. (Xaarlin is unfortunately dealing with some ankle issues right now. We were joking that even despite her ankle, she is such a fast runner that she still ran by in a blur to the rest of us. =D )

Going into the race, I had been concerned at how my left hamstring/piriformis and right IT band would hold up. Initially, things felt a little wonky but nothing serious. Thankfully, after a few miles, things settled in and I nearly forgot about any injury worries. I was more concerned about the impending need to use the restroom.

The course includes an out-and-back on Lake Shore Drive, with one side closed to vehicular traffic. The runners were spreading out more at this point, so I was trying to run the tangents. Bobbi and I chatted about the Blackhawks, Grandma's Marathon (which she is running!), and various other topics. We were also keeping an eye out for Kim, Chris, and Marcia. Kim had started in an earlier corral than us and she was running with her friends Gina and Steve, who were visiting from Texas. With so much to focus on, the miles flew by.

In the weeks leading up to the race, I had ideally wanted to run a sub 1:40:00. However, going into the race I wasn't very focused on time goals due to my injury pain. Based on my time at Mile 5, I knew it would require a pretty serious negative split to achieve it. However, I felt good so I thought I would give it a shot. I told Bobbi and she said to go ahead. So I began trying to speed things up. 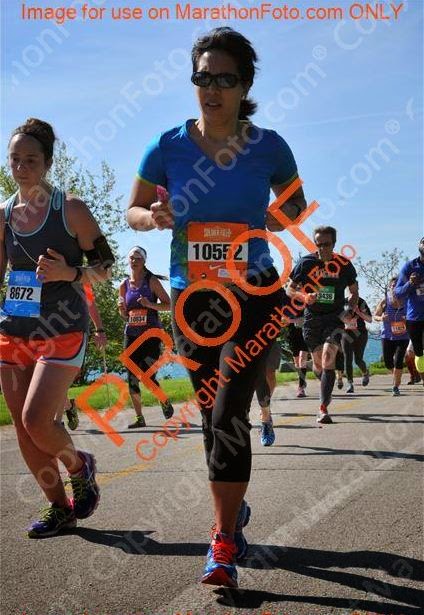 The course was on the lakefront path at this point, which was much narrower than Lake Shore Drive. I was passing a lot of people, but the path was more crowded and more difficult to navigate. My splits for Mile 6 and Mile 7 came in right around 10 minutes per mile.

I told myself to push a little more. But then, my Mile 8 split again came in right around 10 minutes. I began thinking that I was ready to be done. At that point, I knew that a sub 1:40 finish wasn't in the cards for me for the day. But I knew that I was going to achieve a negative split and I was happy about that.

The final stretch of the course runs alongside Soldier Field and past the far end of the premises before entering the stadium. It then runs through the stadium before heading out onto the field. Thankfully I had studied the course map and knew this in advance. However, it was still a bit challenging to see the stadium and know that there was some distance left to go before getting to the finish line.


When I made that final turn onto the field, I looked for the scoreboard and was ready to watch it while crossing the finish line. Unfortunately, a few runners in front of me stopped - literally STOPPED - to take some pictures of the field. Grrrrr. Everyone had to run awkwardly around them to get to the finish line.

Service men and women wearing their military uniforms gave us our medals. It was very humbling and I thanked them profusely. Dozens of folks were stationed on the field to hand out water. We were then herded back into the stadium. We re-passed gear check, and another large crowd of volunteers offered us Gatorade and snack bags.