This past Monday night, I had the incredible privilege of meeting Kenyan marathoner Rita Jeptoo.

Rita came to Chicago to undergo some local training in preparation for defending her Chicago Marathon title in 2014. Nike Bucktown hosted her as a special guest during their Monday night running club. A small group of running bloggers were also given the opportunity to do a Q&A session with her.


Nike Bucktown really rolled out the red carpet for us upon arrival. We each received a goody bag filled with amazing Nike gear, which Jennifer, Erica, and I are wearing in the picture. Thank you, Nike!

We hung out and chatted while waiting for the very special guest to arrive. All of a sudden, Rita walked in. I was so excited!

The event organizers brought her over to talk to us for a few minutes. As we did introductions, she smiled at each of us shyly and offered a very delicate handshake. I had visualized her to be energetic and outgoing, but she was incredibly soft-spoken. It felt like she was surprised and almost taken aback by how thrilled we all were to meet her.


We went around the circle and took turns asking her questions. She was so soft-spoken that it was tough for us to hear her words. At first, Rita's responses were shorter, but as time went on she began speaking more and more freely and at length.

After our brief Q&A with her, the event organizers gathered the whole crowd of event-goers and brought Rita up front. They gave Rita a microphone for this portion of the event, which helped a lot.


Once Rita got rolling, you could clearly sense her passion for running and her intense focus. Here are some highlights from what she shared:

I thoroughly enjoyed listening to Rita speak. She is extremely down to earth, genuine, and likable. I was touched by the fact that while she was speaking, she paused a few times to smile and look around the room. It seemed that she was trying to absorb the crowd just as much as we were trying to absorb everything from her.

At the conclusion of Rita's session, we took some group photos. Rita even asked if the photographers could take a picture using her personal phone. That made me smile.

As the organizers were making some closing announcements, Rita stood with the crowd and listened just as intently as the rest of us. 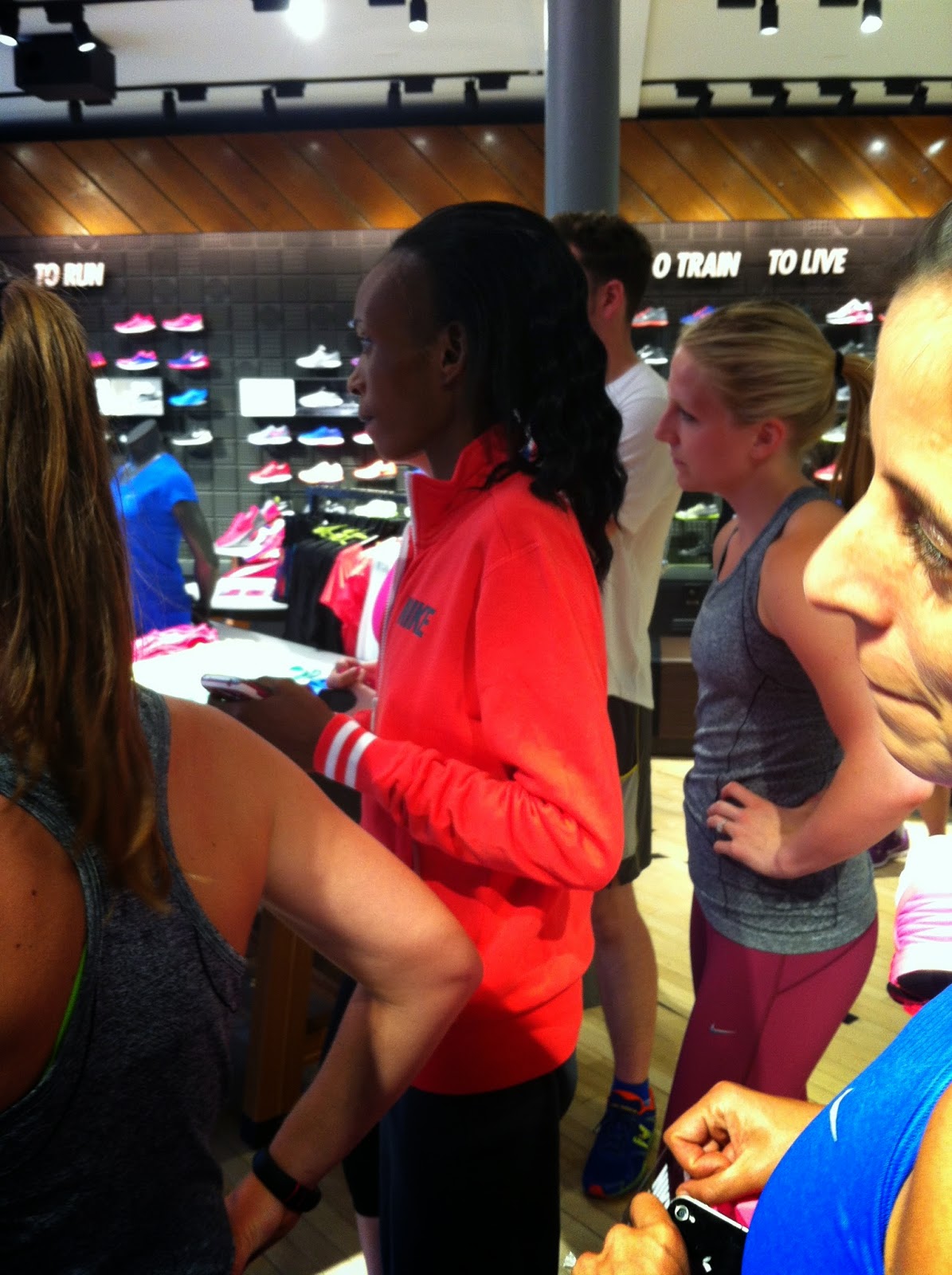 As the crowd began dispersing, some asked to take individual photos with Rita. She looked genuinely happy to do so.

Here is my photo with Rita! Afterwards, Rita wandered around the shop combing through the racks of merchandise, just like many others were doing.

I mentioned to some folks how cool it was that she was so normal, despite her superhuman athletic prowess. The event organizers told us a recent story about how they once witnessed her seeing her own picture on the cover of a magazine. Her reaction: surprise and excitement. They asked her if she wanted a copy. Her response: a shy yes, and could she have a few for her family, too?

I am so appreciative of the time that Rita Jeptoo spent with us at Nike Bucktown. Meeting her has given me a deeply renewed respect for championship runners. She has profoundly inspired me. I will definitely be rooting for her at the Chicago Marathon this fall. She has my lifelong support at any and all other events that she runs!
Posted by emmers712 at 11:48 PM