This past Saturday I ran the Chinatown 5K.


The race took place on July 12, which is my birthday. (In case anyone has ever wondered what the "712" on my blog URL stands for, it represents July 12.) I was also born in the year of the horse, so I was absolutely thrilled to get a race shirt that commemorated my Chinese zodiac year. =)

I will admit that I had entertained the notion of trying to attempt a PR at this race. After all, what better time to get a new PR than on your birthday, on your zodiac year, in a neighborhood of your ethnicity? The pressure was on to earn a picture perfect ending! 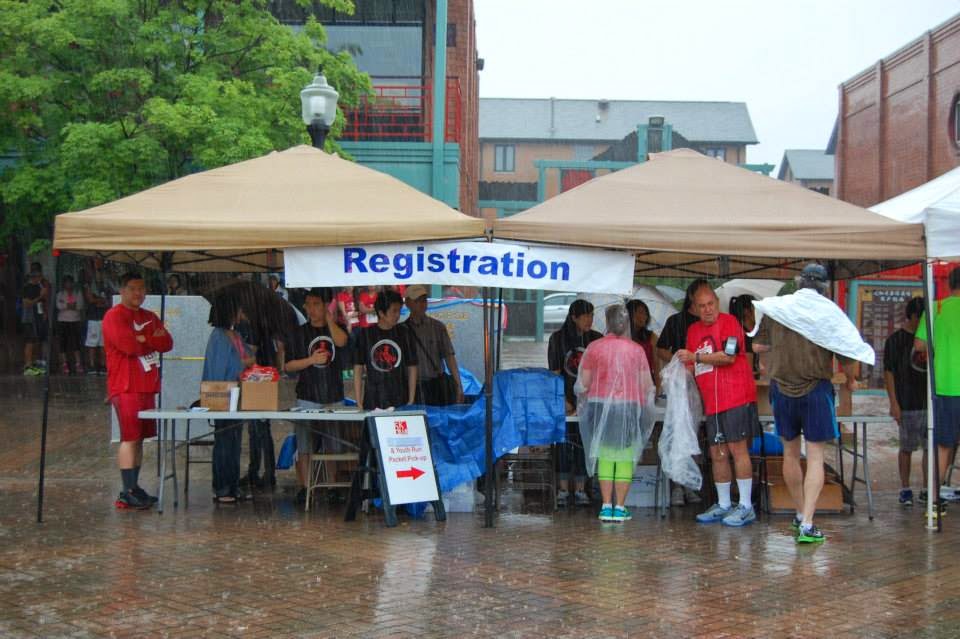 [NOTE: Unless otherwise noted, all pictures are from the Chinatown 5K Facebook page.]

I drove down to Chinatown with Adam and my mom. After we found parking, I stayed in the car for as long as I possibly could before venturing out into the elements.

Prior to the race, I had been debating which shoes to wear. Under normal circumstances, I would have worn my Saucony Kinvaras, which are very lightweight and great for racing. They certainly wouldn't stand up too well to extreme elements, though. Comparatively, my Brooks Ghost GTX shoes are waterproof. What better time to wear them? However, the Brooks are much heavier shoes and not nearly as nimble.

I put on the Ghosts and brought the Kinvaras with me in the car, just in case. But, it became very obvious very quickly that the Ghosts were going to be the choice for the day. There were not going to be any PR attempts in the flood-threatening conditions.

All too quickly, the time came for me to hit the portapotty and head to the starting line. When I stepped out of the car, I got soaked within mere seconds.

Adam asked if I was really certain I wanted to do this. I didn't hesitate before saying yes. It would have been different if it was a cold-weather rain - but the temps were in the 70s. I could handle a summertime rain. Plus, I had already come this far!

Adam then smartly asked if I wanted to keep my Garmin on during the race. Indeed, my Garmin is water resistant but not waterproof. Since I had already sent one Garmin to the graveyard by wearing it in pouring rain, I agreed. I took off my Garmin and gave it to him to keep in the car. This would be the first race that I had ever run while intentionally NOT wearing any kind of a timing device. I left my phone in the car, too.

As I was walking towards the starting line, my Goretex shoes kept my feet dry... for all of about 10 seconds. Lesson learned: Goretex shoes are helpful only up to a certain point. Even waterproof shoes can't help when you are trudging through ankle-deep puddles! As I lined up at the start line, my shoes were already squishing water with every step I took. Blech.

After waiting at the starting line for a few minutes, we were off. I quickly spotted Natalie in the crowd with her Sriracha leggings. Woo hoo! I went to catch up with her and joined her on the course. Yay for having some company while running in the torrential downpour!

The course started on Archer Street, near New Chinatown Square, before turning south on Wentworth Avenue where we ran underneath the Chinatown gate. Natalie and I chatted as we ran. It was then that I got to hear the story behind her surprise visit to Chicago. It turns out that her husband, Brent, had been in Boston on business the week prior, but had gotten diverted to Chicago on the way home to Minneapolis due to flight issues. In lieu of him dealing with further hassles trying to fly from Chicago to Minnesota, she told him to stay in Chicago while she drove down to meet him. What a great idea! I was very happy that it worked out for me to run this race with her.

The course was an out and back. It went south on Wentworth to approximately 34th Street before turning around. At first I was trying to dodge the pools of standing water on the streets. Eventually I gave up and just ran through whatever water was on the path. Since I wasn't wearing my Garmin and I missed all of the mile marker signs, I was relying entirely on my knowledge of the course to estimate our progress.

I was grateful to the race volunteers and police officers stationed along the course amidst the pouring rain. They really went above and beyond the call of duty to be working the course on a day like that.


Somewhere around Mile 1, Zenaida caught up with us along the course and said hello. I was happy to see her and I introduced her to Natalie. Zenaida mentioned that she had seen Erin whiz by earlier on the course, too. This was helpful as I had not seen Erin at all, so I knew to look for her up ahead. Natalie mentioned that she'd run into Erin at the starting line, too. Those Sriracha pants apparently made Natalie quite easy to identify. =)

Zenaida went on ahead. As Natalie and I approached the turnaround point, I looked for Erin but did not see her. However, we did see a race photographer stationed just past the turnaround.


Natalie mentioned that she had never been to Chicago's Chinatown before this day. I said, "Wow, what a great way to experience it for the first time!" Unfortunately we were both so busy watching our footing that neither of us got to enjoy the scenery as much as we would have liked.

Natalie and I counted down the streets from 34th Street to Cermak Road (22nd Street), then made the turn back onto Archer Avenue. There was the finish line, along with a crowd of spectators cheering us on through the final stretch. It was invigorating to get the crowd support at the end.


I looked for Adam and my mom near the finish line, but did not see them. However, Natalie did see Brent. He took this picture of us: 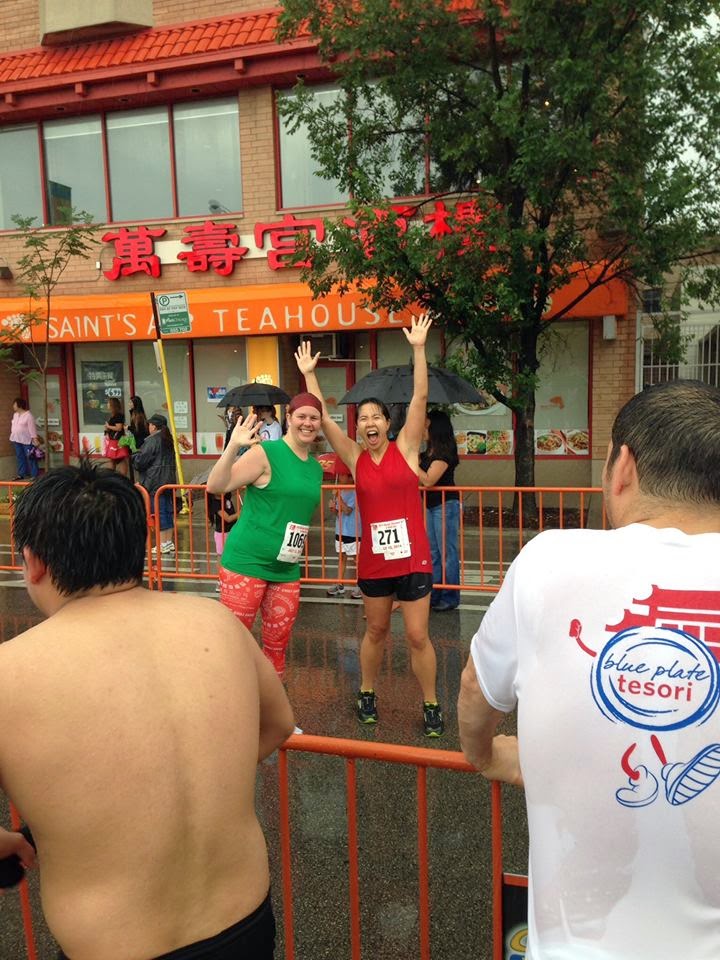 I had no idea what my finishing time was. When I looked it up later that afternoon, it said 31:11. This was actually better than I had anticipated considering how poor the weather conditions were.

Water, bananas, and apples were being served at the finish line. Each race finisher also received a goody bag with a individual-sized carton of soy milk and a can of energy drink.

I found Adam and my mom in the post-race crowd. A lot of other runners were departing right after crossing the finish line. However, the race was hosting a post-race raffle drawing. I had heard that they were raffling off a lot of great prizes, so I wanted to stick around for it. Natalie and I enlisted the help of our family members to take more pictures of us while we were waiting for the raffle to begin. 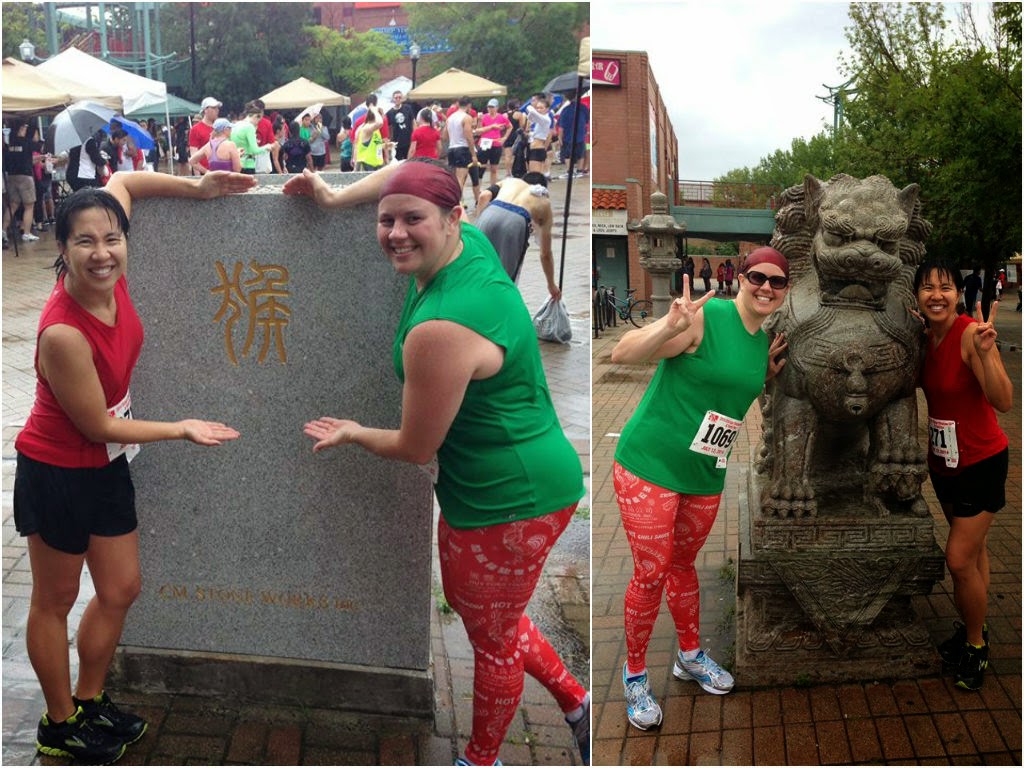 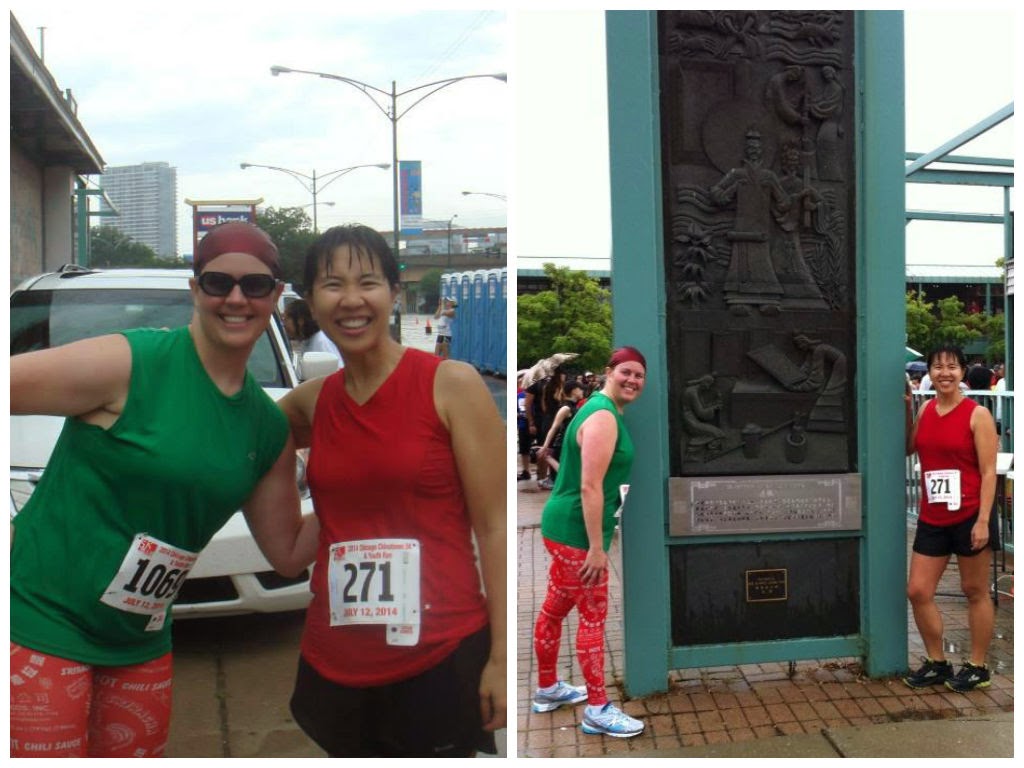 There were a couple of kids races that took place after the 5K was over. It was cute watching the kids racing down the street. Then, there was a lion dance performance. It had originally been scheduled to take place prior to the race but was postponed due to the rain. Finally, the awards ceremony started! First, the male and female winners were announced. Then, the kids' raffle prizes were given away. These included an enormous Hello Kitty, which was heavily coveted by many attendees. The crowd gasped as the winning child came forward to claim the Hello Kitty.


The crowd waited impatiently as the 5K raffle prizes were being announced. There were some very nice giveaways such as mini-iPads, gift certificates to local businesses, and race entries to the Oak Brook Half Marathon.


I was getting progressively more and more uncomfortable standing around in my wet clothes and shoes. Adam and my mom were visibly uncomfortable standing in the rain, too, which was making me feel bad. I was fighting the urge to leave before all the raffle prize winners were announced. But, everyone's patience ended up paying off as I got called as one of the winners!


I ended up winning a basket with two coffee mugs and a book on Asian art from the Chinese American Museum of Chicago. Yay!

Big cheers to the race organizers, volunteers, and all the race participants and spectators (especially Adam and my mom!) for so cheerfully taking things in stride despite the torrential rainfall. Natalie actually registered for the race the morning of, when she already knew how impactful the rain would be. Kudos to her and Brent for persevering!

Despite all that Mother Nature threw at us, I enjoyed the local neighborhood feel of the Chinatown 5K. The race shirt is an instant new favorite! I definitely look forward to running this race again in the future (albeit preferably under better conditions).