I am rushed in publishing my NHL Round 2 playoff predictions before the games start tonight. Nothing like ending the final series of Round 1 on Wednesday night, and having Round 2 start the next night! The NHL obviously does a lot of things purely for TV ratings (ahem, 8:45 PM CST puck drops for Blackhawks games. Cough, cough).

By the way, I went 7 for 8 overall in my Round 1 predictions. Adam actually went 8 for 8! Maybe we should play the Illinois Lottery? 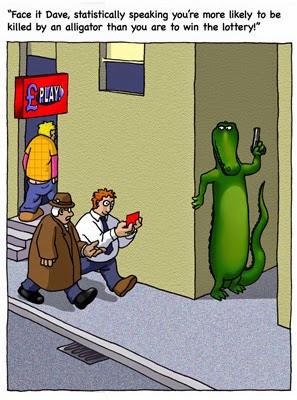 Without further ado, here are my predictions:

EASTERN CONFERENCE
New York Rangers vs Washington Capitals
I was really torn on this one. I expect an ugly, grinding, low-scoring series, with less than 20 total goals scored. That type of style strongly favors the Rangers. I also expect that the Capitals' 7-game series against the Islanders will take some toll on them, whereas the Rangers have been resting for a good week.

Montreal Canadiens vs Tampa Bay Lightning
Talk about having to turn things around quickly. Tampa was lucky to win its Game 7 against Detroit last night. Despite Kronwell and Zidlicky being out of the Wings' lineup, the Wings dominated much of the game. Tampa has been extremely inconsistent in the post-season thus far and Stamkos hasn't scored a single goal. Despite the Lightning sweeping the regular-season matchup against the Canadiens, I think Tampa's stock is trending downwards.

COMMERCIAL BREAK
Check out this funny graphic that I found with alternate NHL team names based on their logo: 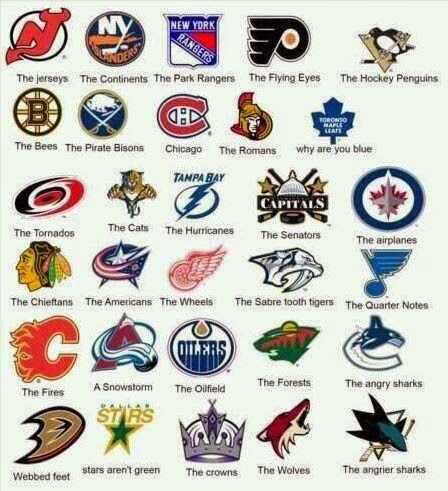 My favorites interpretations were those of the Canadiens, Ducks, Canucks, and Sharks! What about you?

Now, back to your regular programming.

WESTERN CONFERENCE
Anaheim Ducks vs Calgary Flames
Calgary has had quite the fairy-tale with its season and playoff run this year. Alas, I think that the Ducks outmatch them across the board. I do think that the Flames will show up and compete hard, though. The story line here will be all about Jonas Hiller facing his former team.

Chicago Blackhawks vs Minnesota Wild
I believe this is going to be a very challenging match-up on both sides. The Central Division was by far the strongest division in the NHL this year and this series will showcase that.

You could look at the Hawks' performance against Nashville in the first round as either revealing inconsistent goaltending, or revealing goalie depth. I am admittedly more concerned about defenseman depth - how long can Coach Q continue riding his top four defensemen the way he has been? However, it has been fantastic to see Patrick Kane and his dazzling skills back in the lineup. I am also encouraged to see guys like Patrick Sharp, Brad Richards, and Bryan Bickell raising their games.

From the Wild side, the whole story this year has been about goalie Devan Dubnyk. I still don't think that he can keep up his hot streak forever.

NOTE: I have said before that I welcome any feedback letting me know how wrong you think my predictions are. I already know who I am going to hear from on this round (hi Natalie, Kayla, and Tom!) =D

Closing side story:
I went to a volunteer function near Millennium Park last night (more about the event to come). After it ended, I went out to play! I checked out some of the displays for the NFL Draft Town festival, which starts tonight. I also stopped at the Blackhawks Store on Michigan Avenue.

SOMEBODY decided to have some fun with green-screen photo opportunities! 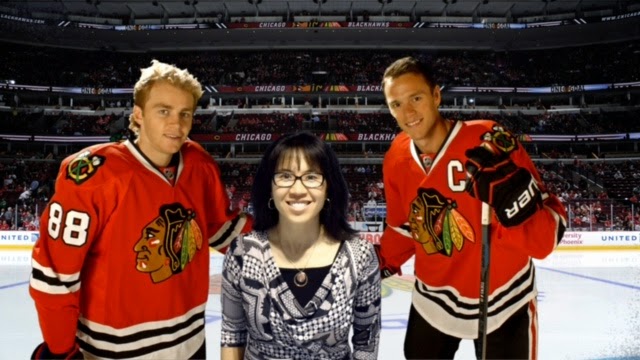 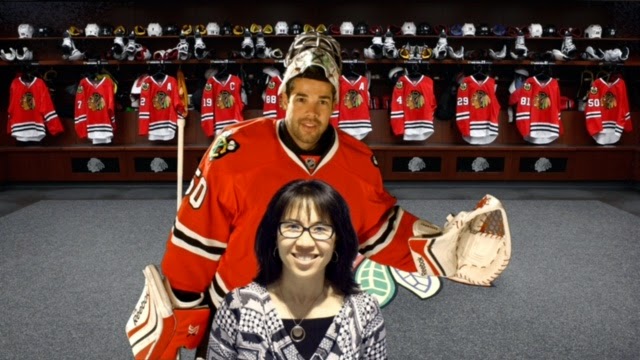 Pretty lifelike, eh?!?!? (It only took me about three tries to get versions in which I wasn't looking the wrong direction or gaping off to the side, etc.)