You only live once

Tonight, Adam and I will be glued to the TV as the Pittsburgh Penguins attempt to clinch a Stanley Cup championship against the San Jose Sharks.

As I've said many times in the past - if my beloved hometown Blackhawks can't be there to win it, there is definitely no other team I'd rather see win the Cup than Adam's hometown Penguins.
With this timing in mind, I am finally recapping our last-minute Pittsburgh visit to watch Stanley Cup Finals Game 1 on Memorial Day.

As I shared previously here, Adam and I were in the DC area over Memorial Day weekend. We were originally scheduled to fly back to Chicago that Monday night. Adam and I talked about the idea of taking a side trip to Pittsburgh for Monday's game, but he thought it would be crazy. I convinced him that we should both still pack our jerseys... just in case. 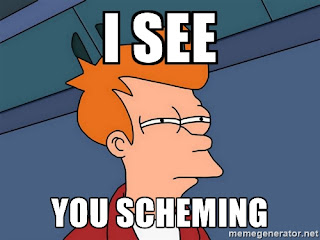 Then, on Saturday night, Adam and I were at dinner with our friends Lauren and Brian. I saw Adam's phone light up with about 50 text messages. This must be important. Sure enough, our friend Chris had snagged face-value tickets to Game 1. He needed to know quickly if we wanted them. Holy cow!!!

What were the considerations? The last time the Penguins played in the Stanley Cup Finals was 7 years ago. Each of the last three times the Blackhawks were in the Finals, I wasn't able to get tickets unless I was willing to take on a second mortgage. It was only a 4-hour drive from DC to Pittsburgh, we had family in Pittsburgh to stay with, and it was a holiday weekend. You only live once.

To me, this was a total no-brainer. To sum it up: 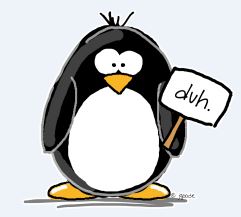 Adam and I went on a mad scramble to alter our plans. After we both secured the time away from our respective offices on Tuesday, we changed our airline itineraries to fly home from Pittsburgh on Tuesday night. (My sincere gratitude goes out to Southwest Airlines for their no-fee change policy, which has saved my life many times over the years!) We made sure Adam's mom and stepdad were okay with us staying with them on Monday night (not that there was any doubt). Finally, we rented a car and on Monday afternoon we made the 200-mile trek from DC to Pittsburgh.

Upon arrival in Pittsburgh, we took the scenic route:

Afterwards, we met up with Chris and our other friend, Brad. We had pre-game dinner at Diamond Market Grill in Market Square. Check out these gargantuan onion rings we got for the table. At first glance I thought they were doughnuts.
After dinner, we headed over to the Consol Energy Center. The Penguins host outdoor viewing parties for fans without tickets. This was the scene outside of the arena: 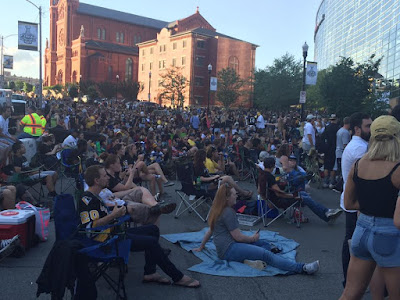 I bet fans have literally been camping out for days in anticipation of tonight's game!

Here's a picture of the four of us right before we entered the stadium. Check out our assortment of jerseys:
Warm-ups: 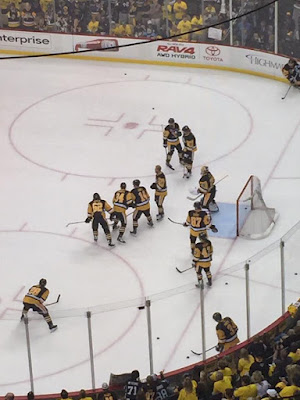 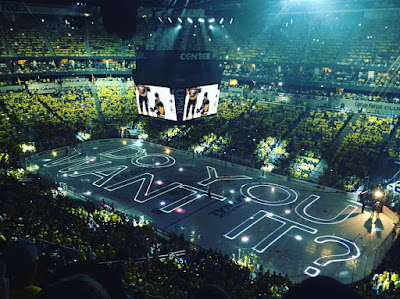 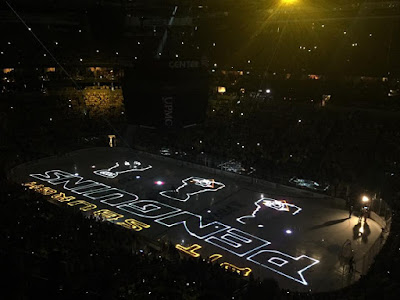 The singing of the national anthem: 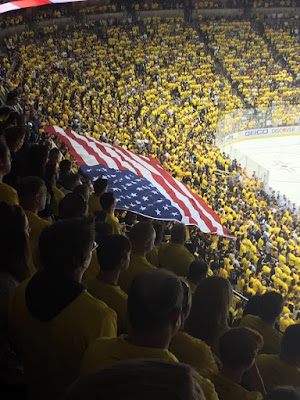 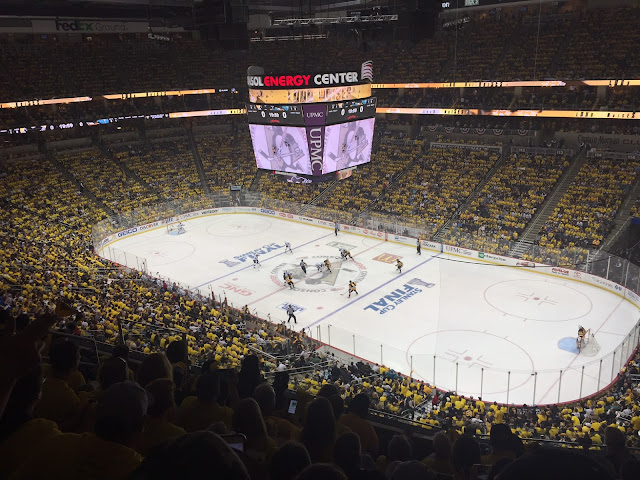 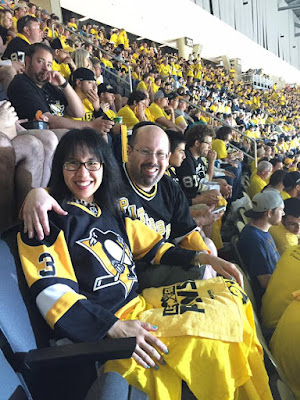 Max Talbot, one of my favorite Penguins from a few years ago, was in attendance. You can read more about him here. In short, he was the hero in the Penguins' Cup-clinching Game 7 victory against Detroit in 2009. Max received a very nice video tribute and standing ovation: 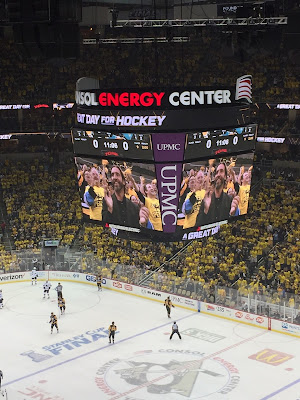 As you might expect, the crowd was completely fired up. It was by far the loudest decibel level I'd ever heard at the Consol. In addition to the usual chants of "Let's go Pens!" or "We want the Cup!" or "Murray! Murray!" (in reference to rookie goaltender Matt Murray), the crowd also chanted "H-B-K! H-B-K!" (in reference to the Hagelin-Bonino-Kessel line). Each time the Penguins scored, everyone exploded with delirium; folks jumped, danced, and high-fived or hugged anyone they could reach.

All fans had been given gold t-shirts to wear, plus gold towels to wave. It was a sea of gold everywhere the eye could see: 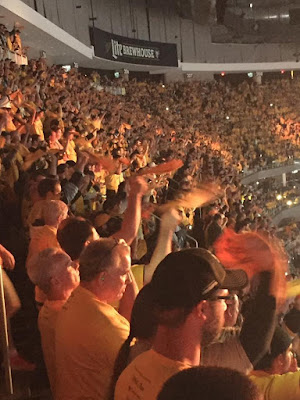 Late in the third period, the score was tied and it looked like the game was going to head into overtime. The tension in the crowd was palpable. Suddenly, with just over 2.5 minutes remaining in regulation, Nick Bonino scored, sending the building into an absolute frenzy.

Check out this insane Punjabi radio broadcast call of Bonino's goal (I'm not kidding about the Punjabi):

The ecstasy was shortlived. Less than 30 seconds on the game clock later, the Penguins got called for a penalty. The Sharks pulled their goaltender while the Penguins were shorthanded. This ensued into one of the most nervewracking 6-on-4 penalty kills I've ever seen. For Game of Thrones fans, a man behind us was screaming, "HOLD THE DOOR! HOLD THE DOOR!" It was complete mayhem. In the end... 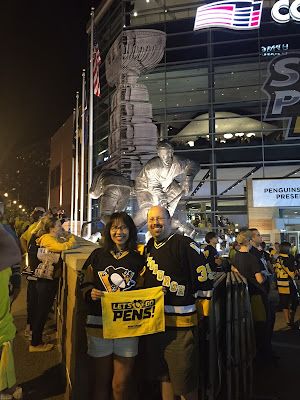 Many thanks to Chris for working his magic to find those game tickets!!! May 30th was Adam's and my 6th anniversary, and what a way to celebrate. =)

Here is hoping there will be even more bedlam in the city of Pittsburgh tonight!
Posted by emmers712 at 5:00 AM