First off, thank you to everyone for your support in my accountability post. I really do appreciate all of your understanding and words of wisdom! Now, back to the more jovial content. =)

Summer in Chicago is wonderful with the endless array of activities and events. I wish I could take a sabbatical between Memorial Day and Labor Day every year! This week, I attended three fun events and wanted to share more about them.

I thought the script would focus on Chicago life, using public transit as the base. While there were indeed some scenes aboard the train, the show was an extremely diverse and hilarious collection of skits about life in general. Scenes were both scripted and improvised.
The show was so cleverly designed, so fast, so energetic, so progressive. The acts were loaded with hysterical jokes and staggering references to local Chicago life that literally slammed home. This included nailing an enormous host of current affairs and politics, including an uproarious jingle about Chicago Mayor Rahm Emanuel. The Mayor's picture was even part of the stage backdrop:
I think Chicago locals would all have an especially strong and heartfelt appreciation for this show. I loved it!

Flavor Your Life
On Monday night, Adam and I went to Quartino for a Flavor Your Life master class on tasting and blending extra virgin olive oil. The class was taught by Giovanni Zucchi, who is an olive oil producer and expert from Italy.
I learned a lot about the production and intricacies of olive oil. Different regions of the Mediterranean produce different varieties, which can be specially blended to suit the tastes of various consumers. We were taught how to properly smell and taste olive oil, and encouraged to evaluate how it impacted our senses.

We each received four types of olive oil to test. Afterwards, we each got to create a personalized olive oil blend based on our individual preferences. We were told the blending process takes a lot of time, trial, and effort; and indeed it did!
The four types of olive oil came from Greece, Spain, and two different regions in Italy. In this instance, the Spanish olive oil was my favorite for its comparative balance of freshness and sweetness.

After class, the attendees enjoyed a wonderful dinner at Quartino: 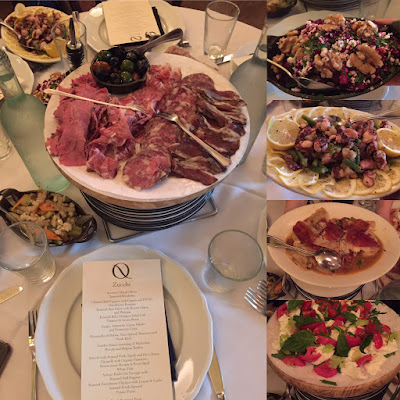 Based on what I learned, olive oil reminds me a lot of wine since both have so many subtleties. My perspective on olive oil has now changed a lot.

All in all, it was a very educational night filled with delicious eats!

Rise and Shine
Yesterday morning, I attended an early morning workout event called Rise and Shine, which was hosted by LunaBar and A Sweat Life.

The festivities took place on the roof of the Wit Hotel. We were treated to beautiful city views: 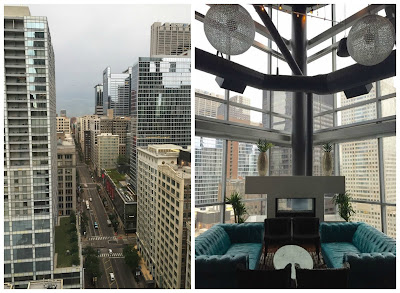 The workout was led by Nike master trainer Betina Gozo, who is an amazingly strong and inspirational woman. Here is the class in action:
Afterwards, we received some post-workout refreshments, and got to hang out and chat with our fellow attendees.

Here's a snapshot of Maggie, Erica, and me, along with some shots of me attempting to do a couple of yoga-themed shots (as inspired by Wendy):
The workout was a great way to start off the morning!

--
Linking up with Amanda for Thinking Out Loud Thursdays.