I hope everyone had a wonderful weekend! I got back from Anchorage yesterday morning (and am now in catch-up mode on blogging). I thoroughly enjoyed visiting Vanitha over the past few days. It was such a wonderful treat to be able to spend so much time with her and to really catch up.

Alaska really touched my heart. I'd been there in the past on a cruise, but thanks to Vanitha I was able to explore more below the surface this time. It was off-tourist season and I loved being able to experience life there from a more local perspective. I found the Anchorage area to be an amazing, stunningly beautiful destination with some of the friendliest people I've ever met in my life.
I have a lot to share about the weekend, so I'm going to break things up into a few more-manageable posts. We'll start by talking about the Alaska Wildlife Conservation Center.
Vanitha and I spent a lot of time there over the weekend and it was my favorite of all the things we did.

The center maintains large land spaces to house and take care of animals that are orphaned, injured, or displaced. When the animals cannot be released back into the wild, the center gives them a permanent home.
Vanitha and I are both animal lovers so we both consider the AWCC a very special place.

The center does different animal feedings once an hour, which were really fun to watch. Here are the feedings we got to see:

Adult black/grizzly bears
The staff explained that they always try to mimic the bears' natural diets. During warmer seasons, the bears are fed meat. However, at this time of year, bears in the wild are either hibernating or getting ready to hibernate, which means their diets naturally get sparser, too. Accordingly, that day the staff fed the bears a mixture of apples, plus some dog food for nutrition. 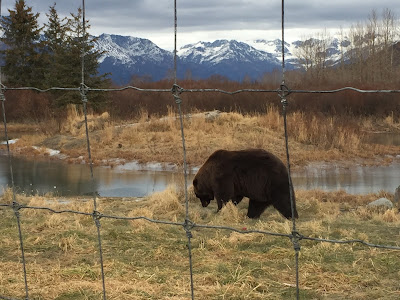 The staff threw the food over the wire fences and the bears would sniff around and find everything. They mentioned that bears have an extremely acute sense of smell which is seven times greater than a bloodhound's.

The pictures don't show size scale very well, but the bears are enormous. I think someone said they weigh around 900 pounds. Check out the bear claws! 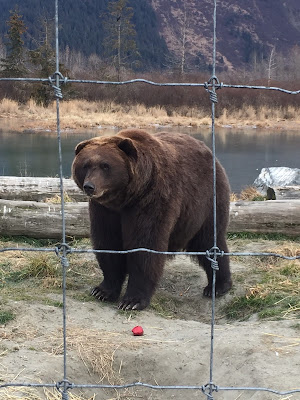 One of the staff threw an apple over the fence that accidentally hit one of the bears. The crowd gasped, but the bear barely reacted. It was a comical moment!

Here are two of the bears sniffing around. 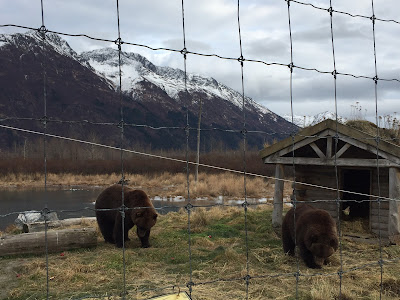 At one point, one of the bears plopped itself right behind the wire fence and gazed around at the crowd. It was so close you could read the expression on its face. 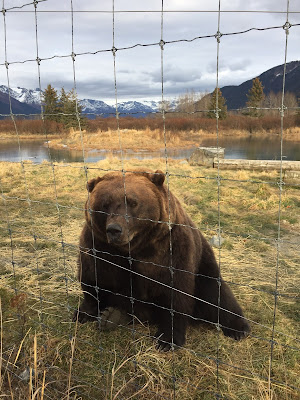 A few minutes later, the bear wandered back a few feet before plopping onto its behind to observe the crowd again: 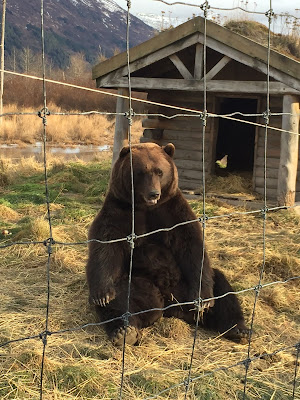 I've heard some native Alaskan tribes consider bears to have human-like spirits, and now I understand why. It was really fun watching the bears interacting in such a relateable way.

Lynxes
I grew up with pet cats, so I have a special affinity for felines such as lynxes.

You can see both lynxes here: 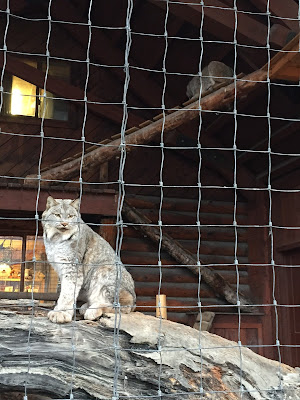 The one in front was much more sociable than the other. The staff said this one was considered the "alpha" lynx, plus the other lynx was shy after having negative experiences with humans in the past.

Both were fed pieces of chicken, and both were quite tentative about eating. 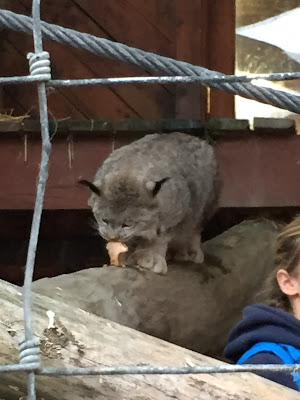 We learned the "alpha" lynx was getting old, so she had some arthritis and was developing a cataract in her eye. True to form, we witnessed her slip while trying to climb up one of the tree branches. That made me sad. The staff said they would be keeping an eye on her to make sure the slip didn't hurt her.

Here she is crouching under one of the trees afterwards. She is a beautiful creature. 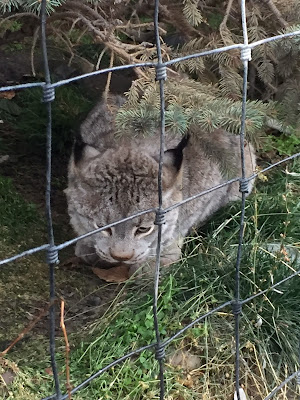 Porcupine
I wasn't expecting to be charmed by a porcupine, but found Kit Kat the porcupine to be surprisingly endearing. (I remember his name in particular because there is another porcupine on site named Snickers. Clever names, yes?) Kit Kat was brought to the center after being found wandering with a snare caught on one leg, which eventually had to be amputated. Thankfully, Kit Kat looks very happy and healthy in his new home. 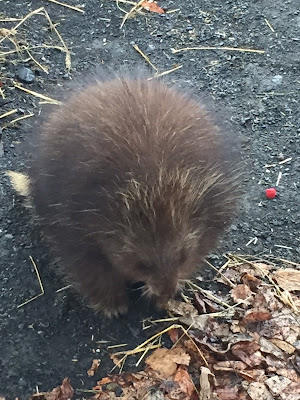 Here is Kit Kat chomping away at a sugar snap pea from a staffer: 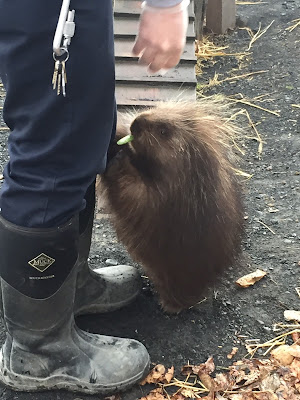 He was an eager little fellow! 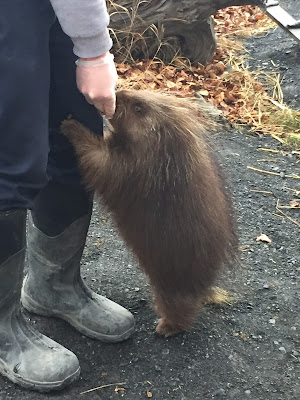 After a few minutes, the staffperson gave Kit Kat the bowl, which was filled with peapods, berries, and some vegetable fiber. The staff told us that Kit Kat didn't like broccoli or brussel sprouts, which made me laugh. 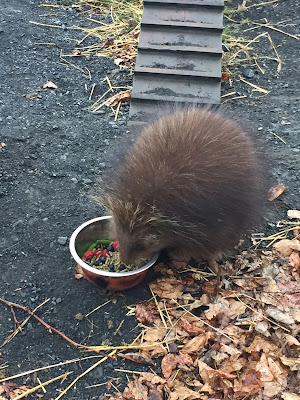 Kit Kat was so excited at the contents of his bowl that he soon buried his entire head inside and stayed that way for at least 5-10 minutes. The staff tried to push the bowl back down to the ground but Kit Kat wouldn't budge. It was the cutest thing ever. 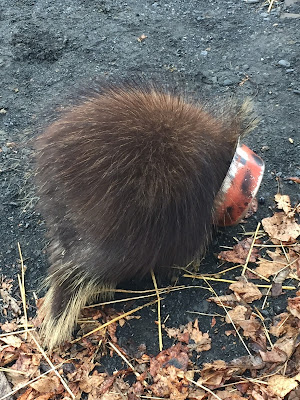 From now on, any time I need something to make me smile, I am going to look back at the pictures of Kit Kat with his head in the bowl. =)

Baby Bear
The center has a baby bear which is currently kept separate from the adult bears until it is old enough to interact with them. It was extremely energetic and playful. 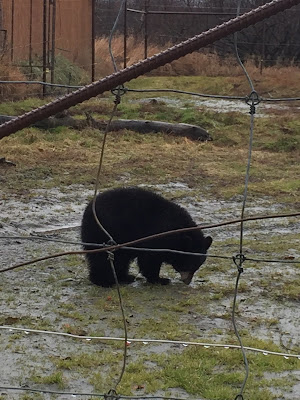 The baby bear was small enough that the staff could still go into its enclosure to interact with it directly. They said they worked with the baby at least three times a day, and that it was very receptive to training and interaction.

Sure enough, the baby bear acted very similar to a puppy: 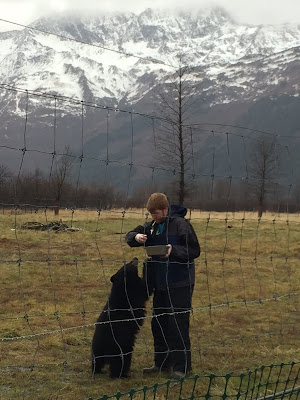 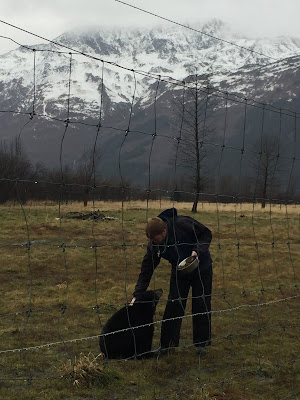 We had a funny moment where the baby bear was sniffing the ground and a bird flew up behind it. The baby bear turned around and literally jumped in terror at the sight of the bird. Based on the reaction, you would never have guessed that the bear is literally about a million times bigger and heavier than the bird. It was hilarious.

Moving on from the feedings...
Unfortunately we weren't able to see every type of animal onsite get fed, but we did get to see plenty of the other animals going about their normal days. Here are a few:

Caribou
To me, this scene was quintessential Alaska: 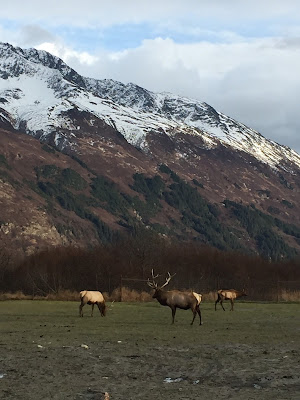 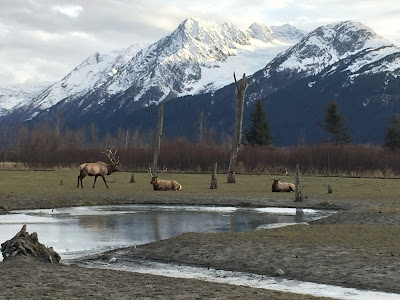 Those antlers are no joke! At one point, we even saw two of the caribou briefly locking antlers with each other. The drama! I can imagine things can get ugly when this happens in the wild.

Here's a close-up. It must be tough to maneuver with those antlers in wooded areas. Also, it's not visible here, but we got to see this guy answering nature's call. It doesn't get any more real than that, yes? =D 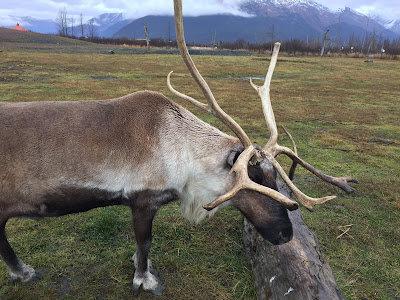 Musk Oxen
I wasn't familiar with musk oxen, but enjoyed watching them sniffing around and finding ridges in the grass to plop down and make themselves comfortable. 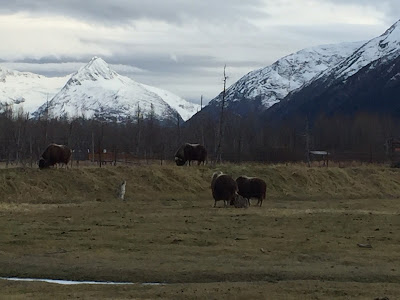 Vanitha told me that musk oxen have extremely warm hair, which natives use to make winter clothing and other garments. She said there is a musk oxen farm near Anchorage, which I would have liked to visit with her if time had permitted! Next time. =)

Deer
There were a few different types of deer onsite. They were very graceful and reminded me a lot of the deer I see back home. 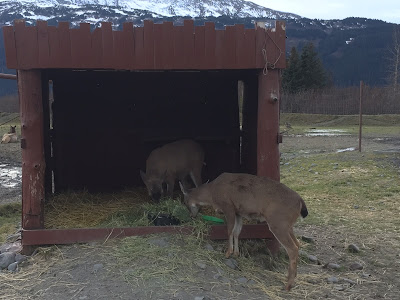 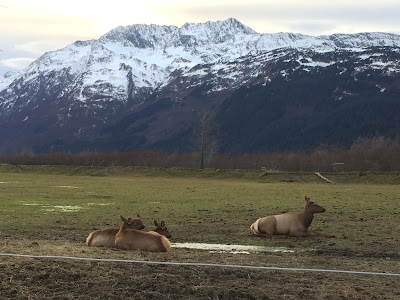 Bison
When I saw these, the lyrics to Home on the Range immediately started running through my head. There were a few baby bison amongst the herd, and you could see the others being careful to keep the babies a bit more protected. 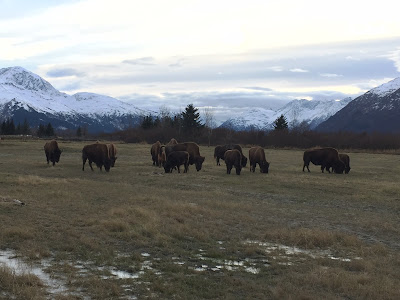 Foxes
It's a little hard to see in the picture, but there are two foxes - one on the ground, and one hiding on the ledge in the corner: 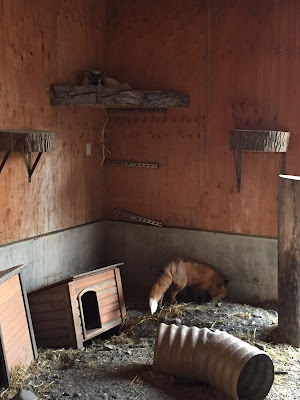 The fox, which had a really beautiful fluffy tail, was very active trotting around.

Seen But Not Pictured Here...
Wolves, an owl, and an eagle.

The wolves looked so much like domesticated dogs that Vanitha and I asked a staffperson how to tell them apart. We learned it can be quite difficult to distinguish the two, to the point that it may require genetic testing. Wow.

In conclusion...
The Alaska Wildlife Conservation Center was an incredibly heartwarming destination. I loved seeing all the animal interactions in such a natural environment. The staff members are all extremely knowledgeable. They clearly love what they do and it is obvious the animals are very well cared-for. I wouldn't hesitate to visit again and again, if given the opportunity. If I lived in the area, I would love to volunteer there.

To anyone traveling Anchorage or the surrounding areas, this center is a must-visit!

I will be linking up with Lauren, Van, Isabel and Marcella for Wanderful Wednesday; with Chris and Heather, Lauren, Ashley, Amanda and Brian, and Carolann and Macrae for Weekend Wanderlust; and with Arnie and Jo, Sally-Ann, Anda, and Anisa and Katherine for The Weekly Postcard. 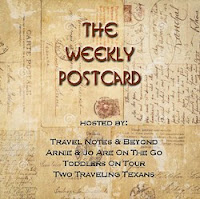