Rock N Roll DC Half Marathon completed this past Saturday! 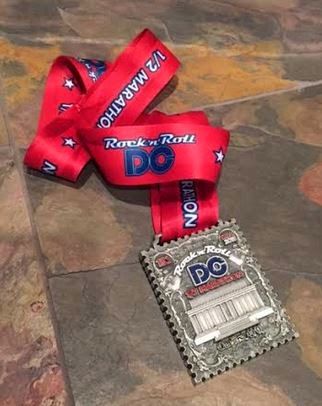 Despite weather challenges, I had a great time running this race! I've got a lot to share. Today we'll go with the "Good, Bad, and Ugly" recap format.

It is really too bad that the relentless rain marred everything, because Rock N Roll DC was a fantastic race. The course was one of the most scenic that I've ever had the privilege of running. The energy was astounding and the sense of patriotism was unparalleled. I would give this race a HUGE two-thumbs up.


Finally, I have to give a very, VERY special thank-you to my wonderful family. Adam and my father-in-law were both up at a truly ungodly hour on Saturday morning to get me to the starting line. As I mentioned, my father-in-law's local knowledge of the pre-race McDonald's location was an absolute godsend. Then, Adam and my father-in-law spent the morning riding the Metro all around DC amidst the rain, crowds, and long lines to spectate, meet me at the finish line, and get me home in one piece. My stepmother-in-law was unfortunately unable to join the day's festivities due to foot issues, but she couldn't have been more supportive, hospitable, or accommodating throughout the entire weekend. Huge thanks also go out to Aunt Marylin, Uncle Marty, and cousin Matthew for all of their wonderful hospitality over the weekend, as well!